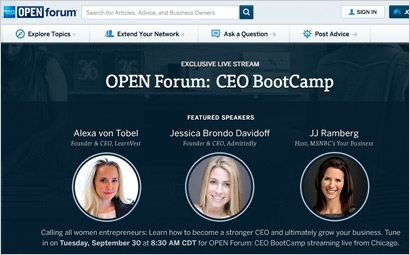 American Express uses the tech company Taboola to drive traffic to the Open Forum site, according to an opinion issued by the self-regulatory group. The links on those Taboola ads previously said “Open Forum,” but did not indicate that people who clicked on the links would land on a page operated by American Express, the opinion says.

The National Advertising Division wrote in its opinion that American Express has taken the “necessary and appropriate” step of revising its ads. The links now indicate that clicking on them takes people to a site operated by the financial company, according to the opinion.

The self-regulatory group suggested that the previous “Open Forum” label, standing alone, potentially confused consumers. “NAD’s concern generally was whether the label, 'OPEN Forum,' reasonably described the Web site to which consumers were directed, and specifically whether the label 'open forum,' which generally denotes a place or space where people can exchange ideas, could reasonably confuse consumers as to the nature of the linked Web site,” the NAD wrote.

Although American Express changed the labels in its ads, the company disagreed that the old approach was problematic. American Express told the self-regulatory group that the “Open Forum” label “correctly identifies the source of the content -- i.e., the well-known OPEN brand,” according to the opinion.

“The advertiser claimed that to require additional disclosures would mean that NAD is distinguishing between Web sites that are purportedly 'purely editorial' (owned by companies that sell media) and those that are 'commercial' (owned by companies that sell products),” the opinion says. “American Express asserted that such a distinction would not reflect the reality of the marketplace, as media sites, themselves, are a mix of 'purely editorial' and 'commercial' content.”

American Express also pointed out to the BBB's self-regulatory group that the Open Forum site offers articles written by freelance journalists, and that many pieces don't refer to the company or its products. On Friday, the site displayed articles like a reported piece on the ways in which dating is harder for entrepreneurs, and a column alerting business owners to the signs that their companies “may be hitting a wall.”

The financial company said in a statement emailed to Online Media Daily that it has “developed guidelines for native advertising placements emphasizing the importance of transparency.”

Taboola, the company that placed the ads, came in for criticism earlier this year when the BBB's self-regulatory unit said the company's prior “sponsored content” disclosures weren't noticeable enough. Taboola agreed to make those disclosures more prominent.