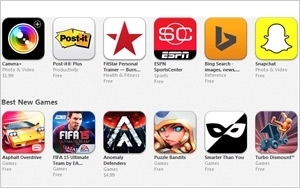 Among the many things that digital media broke in the traditional economy was paying for content. For over a decade, newspaper and magazine publishers especially beat their head against a wall over this, pontificating about the need for people to pay for their quality content, and wringing their hands in private over how unprofitable startups online eroding the value of media. What will users pay for online was a question that dogged traditional media for years. The answer was always the same. People will pay for things that make or save them money (WSJ, TheStreet, Consumer Reports), or for services that will connect them to one another in real (dating sites) or imagined (porn) ways.

For years mobile platforms promoted themselves to traditional media as the cure for free content. In the pre-smartphone era, carriers used their monthly billing system to extract recurring payments for every mobile content download, from weather and horoscope apps to comic strips and games. Consumers generally hated the model, but many legacy media companies saw mobile as a platform that did not suffer the free-itis inflicted by the Web.

The app economy has evolved this early model with a hybrid approach that arguably does indeed maintain a value on content. According to a new Harris survey (done on behalf of productivity software developer Branchfire) 43% of mobile users say they have paid for an app. And while the majority still say they don’t pay for app, that 43% is a fair number considering the overall difficulty publishers had had extracting consumer-direct revenue.

Mobile users are also much more willing to commit to a subscription model that eluded most online publishers for years. More than a third (37%) of smartphone or tablet owners are subscribed to one or more app-based services. My guess is that Netflix is responsible for a great many of those subs, since 57% are in the streaming movies and TV category.

But the sub model clearly has proliferated beyond Netflix. While still small, 11% of subs are in the productivity app category, 30% in games, 27% in streaming music and 25% in news and magazines. In many ways this is an inversion of the old adage about people's willingness to pay only for content that makes or saves them money. The Harris/Branchfire study found that streaming TV and movies is the category in which most people will pay the most for on a subscription basis.

The shift in attitudes about paying for digital media is fueled in part by a natural evolution of usage and growing acceptance of virtual goods. The freemium model, of course, helped meld both traditional and online attitudes toward media into a new hybrid for content that in fact the shareware world had discovered in the 80s.

Back in the day we used to theorize that people accustomed to CDs, albums, DVDs, newspapers and magazines had trouble wrapping their heads around paying for stuff they couldn't wrap their hands around. Tangibility seemed to be key. While downloadable music helped train us to accept digital goods as real, you might argue that even there, portability and mobile devices helped provide the tangibility people still needed. By making the media more personal and portable than a desktop site, and by using the app format, digital media took on some of the properties of traditional tangible media.

People don't really mind paying for content, it turns out. They just too sure about paying to consume media on the most uncomfortable and distracting media consumption platform imaginable -- the PC desktop.