Apps No Miracle Grow For 1-800-Flowers 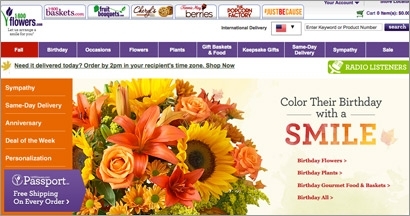 People may be spending most of their mobile time in apps, but don’t tell that to Chris Taylor of 1-800-Flowers.com. The retailer's digital marketing head on Monday pointed out that its mobile customers still mostly come through the Web. That’s partly because people tend to buy its main products — flowers and small gifts — infrequently, which doesn’t lend itself to regular app use.

“The value proposition for someone to have our app on their phone isn’t as strong, so we’ve been much more Web-focused,” said Taylor, speaking at an Advertising Week panel focusing on mobile commerce and marketing. But 1-800-Flowers is hardly alone among retailers. While online-only retail giants like Amazon and eBay see most of customers' mobile time spent in apps, mobile many traditional retailers still see activity skew toward the Web side.

According to comScore data released in July, time spent on mobile sites easily outpaces that in apps for stores like Walmart, Best Buy, Home Depot, Apple and Sears. Taylor noted that the mobile Web is better suited to browsing and shopping, though customers still tend to make purchases more on the desktop than mobile because of the long checkout process involved, including entering a recipient’s information.

For flash sale shopping site Gilt Groupe, however, apps have been a better fit. “For us, the highest converting channels have been the native apps. The demographic aligns really well between people who buy the most expensive devices and shop on Gilt,” said Yonatan Feldman, the company’s VP for mobile and global engineering.

The panelists, which also included executives from marketing technology provider IgnitionOne, retargeting platform Criteo and ad technology firm AppNexus also highlighted a growing focus on maintaining engagement with apps beyond simply driving downloads. Outside of a relative few apps from the likes of Facebook and Google, most apps have a short shelf life.

“There's still not a tremendous amount of apps that have usage that they should yet,” remarked IgnitionOne CEO Will Margiloff. He suggested app developers and retailers should focus on bringing on existing customers first, using first-party data for targeting, before prospecting for new users. Naturally, Criteo made a case for retargeting to boost app engagement.

The Holy Grail now, though, is being able to reach the same customer as she moves among the desktop Web and different devices. 1-800-Flowers’ Taylor said the company has done some cross-device targeting using probabilistic techniques, but hasn't seen great results. But he noted Facebook's announcement Monday on the launch of Atlas to target users across computers and mobile devices using log-in data holds more promise.

“That’s putting a new arrow in our quiver,” he said, but added that he was still skeptical about how well the service would perform in the near term.