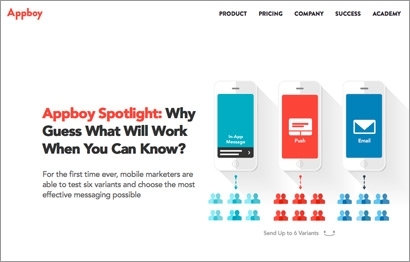 Facebook saw its mobile ad business take off with the introduction of app install ads, providing developers with a key new tool for pulling in new users. But a long-standing problem for developers has been the short shelf life of most apps. Many are used only a handful of times before disappearing from a user’s phone screen. What’s more, they have to contend with apps from the likes of Facebook, Google, and Pandora that dominate users’ attention.

A comScore study released last month showed that nearly three out of four minutes of app usage takes place on a person’s top four apps. And those are likely to be the usual suspects mentioned above. Getting users to maintain interest and engagement with other apps is where app marketing automation firm Appboy comes in.

The startup offers a suite of tools that help companies retain and interact with app users through in-app messages, push notifications, email and in-app feedback forms. The focus on app engagement rather than simply driving downloads has helped Appboy to raise another $15 million in venture funding, which it announced today.

Appboy CEO Mark Ghermezian said the new capital will be used to increase spending on sales and marketing efforts, accelerated tech development and new hiring. In the last year, the New York-based company has doubled head count to about 40 employees. Driving the company’s growth is the demand for help boosting app interaction beyond the download.

“The cost for development of an app, and the concentration getting people to download it has now evolved into a loyalty question that must be answered by every single app. There is a clear distinction between Apps which take their post install marketing seriously and those that do not,” he said.

Among brands that rely on Appboy’s service to enhance app usage are LifeLock, USA Today Sports and Urban Outfitters. Using the company’s platform, app publishers can create individual user profiles based on behavioral and demographic factors in order to target them with the right messages. It also provides other tools for segmenting audiences and tracking campaign performance.

Ghermezian would not reveal Appboy’s expected revenue for this year, but said revenue is growing in “triple digits” by quarter. But because of the current focus on expansion, the company isn’t yet profitable. In connection with Appboy’s new funding, Doug Pepper, an InterWest general partner, will join the company’s board. He was an early investor in publicly traded marketing software firm Marketo.