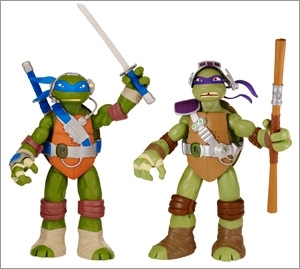 Turtle Power rides again. Whether ringing your front doorbell this Halloween (the National Retail Federation estimates that some 1.8 million Teenage Mutant Ninja Turtles will roam the streets) or wielding a high-tech katana sword in the aisles of Toys R Us, it’s clear the reptilian Fab Four are this year’s retro toy hit.

Leonardo, Michelangelo, Donatello and Raphael may be celebrating their 30th birthday this year, but they’ve had their marketing ups and downs, says toy expert Jim Silver, editor in chief of TTPM.com. Following a huge wave of popularity in the 1980s and early 1990s, they ninjitsu-d their way into the hearts, video collections and toy boxes of today’s Gen Y parents.

“But two subsequent efforts to reintroduce them failed,” he tells Marketing Daily. “When Nickelodeon got involved, created a brand-new animated series and committed to a movie, it made all the difference.” And the almost universally terrible reviews of this summer’s film didn’t matter: “These four heroes are very funny, and kids relate to the humor.”

Even little kids get the joke, says says Patricia Hogan, a curator at the Strong Museum in Rochester, N.Y., who specializes in action figures.

“There’s just something wonderfully absurd and silly about a fast-moving turtle,” she says.

It also helps that the characters are teens. “Experts in child development often say that kids like to follow kids who are just a bit older,” she tells Marketing Daily. “I suspect if these were Old FuddyDuddy Mutant Ninja Turtles, they’d have less appeal. They’re not grownups, like Superman or Batman. They’re kids. All they want to eat is pizza.”

And finally, she says, there was brilliance in creating a cast of four heroes, each with a distinctly different personality. “You can find the turtle most similar to you, and every kid in your neighborhood has traits that are more similar to one turtle than another.”

And while Silver says not all characters can make an automatic leap to the toy aisle (sorry, ‘bout that, Nemo), the turtles are a textbook success story.

“Throughout the history of toys, kids are attracted to nonhuman characters who undergo some sort of change,” Silver says. “Transformers aren’t people, they’re robots.”

Target has already tapped the turtles for its Top Toy list for the upcoming holiday. But Toys R Us is really flexing its shell, with exclusive action figures, play sets, vehicles and role-play items, all linked to the third season of the Nickelodeon TV series. It’s also running a “Turtles in Training” Sweepstakes, with a shot at winning an all-expense-paid trip to Los Angeles. (Winners will get to add their voice to an upcoming episode of the cartoon.)