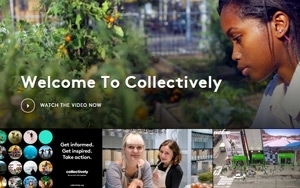 Unilever,  BT Group, The Coca-Cola Company, Marks & Spencer and Carlsberg Group have cooperated to create a nonprofit Web site and global digital platform with the ambitious goals of scaling up sustainable innovation and inspiring action on sustainability by the public, as well as businesses and government.

The platform, called Collectively, seeks to connect and showcase "the people, places and cutting-edge ideas that are creating the change we need to see now to attain a better future," according to an explanatory launch message on its site. "Collectively symbolizes a new synergy between industries, institutions and people that moves beyond blame and fault to focus on positive change...Get inspired. Get informed. Take action."

The site will be updated daily with articles and information about sustainability solutions and innovations across industries and disciplines (including food, design, architecture and technology), written by an independent editorial team of staff and freelancers.

In addition, the public — Millennials are the core target audience — will be encouraged to submit positive contributions and ideas for the channel around a series of regularly updated sustainability themes.

The platform was developed with Vice Media’s creative services division, Virtue; Forum for the Future (a global, independent nonprofit that works with businesses, governments and organizations to solve complex sustainability challenges); and Purpose, an independent organization that seeks to facilitate new social and economic models.

Collectively's leading sponsor companies, who say they were inspired by discussions about accelerating sustainability during the World Economic Forum, have since been joined by more than 20 other multinational companies.

Collectively’s ultimate aim is to offer a mass media-like channel that can help make sustainable lifestyles "the new normal" by making sustainability "cool, popular and exciting," Eddy Moretti, chief creative officer of Vice, tells Marketing Daily. "There's lots of sustainability activity on the supply side, but people don't seem to be connecting into that," he says. "The goal is to get young people all over the world involved -- to stimulate consumer advocacy through content and conversation and activities."

According to Moretti, the editorial team consists of professional journalists with experience in covering "innovation and science beats." He says that the site is not designed to be a sponsored content platform focused on conveying positive stories about the sponsors' own sustainability initiatives, although the companies could be covered occasionally as part of the overall editorial mission. The coalition brands' visibility on the site will be limited to their logos being featured on a "partners" page, he says.

To drive awareness and engagement with the platform, all of the coalition members will promote it on their social media assets, and members including Facebook, Google, Twitter and YouTube are donating services and media, Moretti reports. Vice will be promoting the platform through its own 10 sites, he adds.

“Encouraging people to choose to live, work and play sustainably on a scale that will genuinely make a difference is one of the world’s biggest challenges," summed up Will Gardner, Unilever's VP, global marketing projects, who is acting as CEO of Collectively. "We hope to change that through Collectively. It’s a place to share stories, inspire each other and create the change we need to see in the world. Collectively brings together some of the world’s biggest companies, nonprofits and leading thinkers because we believe that together we can achieve much more, much faster.”