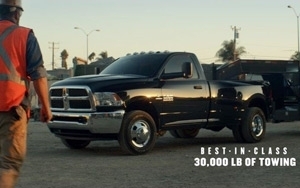 Ram Truck is hoping to cut through with a straight-ahead campaign focused on “Just the Facts.” The TV effort, via Dallas-based The Richards Group, comprises four TV spots, the first two of which debuted during the NCAA/NFL network football games this past weekend. The ads are directly competitive, calling out cross-town rivals on what Ram can do that they can’t.

The narrative, with voiceover by actor Sam Elliott, who has been the voice of Ram since 2010, is also disparaging of pickup truck advertising in general, or at least the cliches used in pickup truck ads: farmers throwing bales of hay in the back, slow-motion footage of the truck plowing through mud, etc. Instead, the approach features people who use the vehicles in their everyday work.

In one of the spots, as the camera follows a contractor in a worker's florescent vest as he strolls through a work site to his truck, Elliott says "No cowboy hats, horses, or hay bales. Just a Ram 3500 that, head to head, can out-pull Ford's F-350 by more than 1.5 tons." The ads direct viewers to a web site.

The other just-launched spot touts Ram mileage benefits, using a head-to-head comparison of Ram 1500 Eco-Diesel versus Ford F-150 EcoBoost. The feature focus is critical right now, as Ford has gotten a lot of attention for its forthcoming 2015 F-150 pickup, which has aluminum skin. But Ram has been making headway after years of being an also, also ran behind Ford and Chevrolet/GMC Silverado and Sierra, respectively.

Last month, Ram trucks sold strongly, up 30%, posting a best-ever month for the brand, and 53rd month in a row of year-over-year increases, per the automaker. Ford truck sales were down, impacted by the fact that it had shuttered production to retool for the forthcoming 2015 F-Series, but probably also because buyers are waiting for the new truck. Still, Ram has a ways to go in terms of volume.

The Fiat Chrysler Automobile truck brand moved about 38,500 trucks in September, and 337,148 trucks in the first nine months this year. Ford sold 59,863 F-150 trucks last month, the first time in a long time that number dipped below the 60,000 mark. Sales of Chevy Silverado were up 54% over September last year, moving 50,000 trucks in the month. Silverado and GMC Sierra sales combined reached 530,000 year to date. Distant fourth is Toyota, which sold 8,736 Tundras last month, representing a 2% drop.