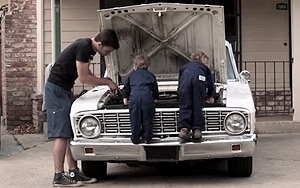 Automotive do-it-yourselfers are a major retail market for Ashland’s lubricants division Valvoline. This summer the company featured a handful of serious DIY auto buffs in a video series, "Under the Hood: the Spirit of DIY." The four videos focus on auto projects by bloggers, freelance writers, and/or amateur racing participants. The goal is to promote the brand and maybe increase the potential DIY base by showing that it’s actually possible to work on your car. If these guys can rip an engine apart you can probably change your own oil.

The first video, which launched two weeks ago, is a 2:30 documentary on Tim Odell of Hooniverse.com and his two young sons, each a "gearhead in training." In the film, he works on his ’64 Ford Falcon and ’69 Jeep Wagoneer, while talking about what his goals are with the cars. He concludes with the pleasure he gets when he takes a post-tinkered car out for a test drive, and the difference is palpable. Only at the end do you see the Valvoline brand call-out.

Jamal Muashsher, director of marketing for Valvoline, tells Marketing Daily the series, which lives on the brand's YouTube site, is also cross-promoted on the company's social media channels as well as on the channels of each respective personality featured. "We love the authenticity and gritty feel they bring, and have approached distribution in much the same way, from a grassroots level with relevant bloggers, media and our own car enthusiast fans and followers," he says.

He tells Marketing Daily that Valvoline has worked with several automotive and DIY influencers over the past years. For this campaign, the subjects include a gearhead doing fuel-efficiency surgery on his car, and someone tuning his car for racing. In addition to Odell, they are Peter Tarach and Dave Pratte of Speed.Academy, Dan Gray of MPGomatic.com and freelancer editor and photographer Max Matthewson.

"While we have many terrific racing partners at Valvoline, including the drivers and crew at Hendrick Motorsports, we wanted to focus this series on a more everyday look at automotive DIY by profiling our selected influencers," says Muashsher, adding that Valvoline developed the concept in collaboration with comms agency Cohn & Wolfe, with production elements handled by Empire Green.

Last month, notes Muashsher, the company ran a series called #GarageHacks, about ways to boost work efficiency in the garage. "Again -- we worked with our influencers and racing partners to start the conversation, and from there received an enthusiastic response back from the community with their own input and ideas."