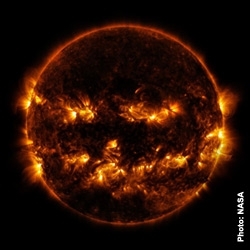 The National Aeronautics and Space Administration captured a spooky picture of the sun. Active regions or hot spots gave it the appearance of a jack-o-lantern -- just in time for Halloween. NASA said the picture, taken on Oct. 8, is a blend of intense light and energy captured by the Solar Dynamics Observatory. Ironically, the keyword "pumpkin" or "jack-o-lantern" didn't make Experian Marketing Services' or Google's list of top costume searches. Here's what did.

Google list of the most-searched costumes is similar with Queen Elsa taking the No. 1 spot. Elsa snowman sidekick Olaf takes the No. 2 spot. Maleficent took the No. 3 spot, followed by Ninja Turtle at No. 4, and Anna also from Frozen at No. 5.

Searches for dog costumes are trending nearly 15% higher compared with last year, and one pet costume even managed to enter the Top 10 trending costumes. "Spider dog" took the No. 9 spot, likely inspired by the viral video Mutant Giant Spider Dog, which has generated more than 99 million views on YouTube since the beginning of September, per Google.

How do adults plan on spending Halloween this year? In 2013, Americans spent $6.9 billion on Halloween costumes, per Nextopia, a provider of eCommerce site search and navigation. Citing the U.S. Census Bureau, Nextopia published numbers stating 41.2 million kids ages 5 to 14 will go trick or treating this year. Parents, 38%, will take them trick or treating.

As for me, pumpkins, orange and red leaves, chocolate caramel apples, and extra Snickers, Milky Way, Kit Kats and other yummy goodies are thrown in the freezer to ration for the remainder of the year because I don't buy that stuff otherwise. That's what I think about around Halloween.