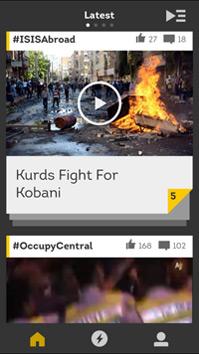 One of the coolest and most forward-thinking apps I have seen in recent months is from the news service Al Jazeera. Yup, that Al Jazeera. The new app they released weeks ago does a bit of an end run around platforms that either don’t carry the controversial network or bury it in the nether regions of the digital guide. They also took the opportunity to do a bit of a brand redo, naming the app “AJ+” and distancing itself from past controversies and accusations of bias. In fact, you have to drill into the T&C on this app before tripping over a direct reference to the parent company.

Whatever you think of the network, this app is one of the few serious explorations I have seen lately of what mobilized media looks and feels like. Tooled for short bursts of updates, the app presents stories in a series of cards that you swipe through for different elements like animated infographics, quick user polls on the topic, and fast facts. So a lead story on how much fighting ISIS costs has a top card that animates basic facts about costs trailed by user comments. Wipe to the next card and we get a quick view of the companies profiting from the war, followed by a poll of users on that topic and more one-screen pull quotes and data grabs.

This style of building a story out of pretty fragments and short attention spans almost feels like our first encounter with USA Today decades ago. It felt dumbed down and perhaps too solicitous an audience with limited attention and even less tolerance for detail. But now that we are consulting so many news sources to get our information, AJ+ is smart enough to understand that it is futile trying to be the single comprehensive source. Instead it is carving out a kind of informational role -- rapid-fire news, context and a sample of public opinion (or AJ+ user perspective) -- all in a minute. A lot of news services are trying to compress and curate for the at-a-glance modern user, but I don’t think I have seen it done so well as this. It is blending the aesthetics of magazine pull quotes, infographics, quick TV clips, and surveys.

And while the relentless polling and questioning of audience attitudes becomes tiresome and cloying after a while, it does have a cumulative impact. This is news, for good or ill, reconfigured as a kind of call and response process. At its best this model breaks down the top-down authoritative dynamic of traditional news media. You are always aware of an audience processing the information. At its worst, it feels like news playing to a crowd whose opinions in this case often represent a narrow range of fairly predictable responses.

AJ+ has a number of other cool ideas that I wish other news outlets would adopt. In its default mode it uses the fat image feed format that is plaguing us lately. You know what I mean -- scrolls that use enormous images and perfunctory headlines in some effort to give the experience a lush look. The problem, of course, is that this is a terribly inefficient information style for mobile. It takes relentless scrolling just to browse through a small selection of stories. AJ+’s solution is ingenious -- just pinch the scroll to collapse the big story cells into a more concentrated stack. Instead of one story stack appearing per screen, we get 7 or 8.

Customization and accommodating individual interests and available time with the app are the main design cues here. A top-line menu lets you collect all videos into three length buckets to fit the use case. Ongoing stories can be easily tagged for following so that you are alerted to updates and can find the latest details on stories of most interest in one place.

The app is one of those rare cases when information architects designers are thinking hard about what mobile-first really means.