Google's Android About Togetherness, Not Sameness 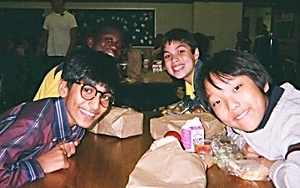 Google’s Android may be the most popular mobile operating system in the world, but there has been precious little done marketing-wise to unite its users.

Until now. Coinciding with the launch of its Lollipop system update (and perhaps to steal a bit of thunder from Apple’s new round of iPads), Google has launched a video advertising campaign with the tagline, “Be together. Not the same.”

In one ad, entitled “And You,” people are shown dancing, playing, taking group selfies, heading on road trips as title cards read, “you,” “and you,” “and her,” “and him,” “and them,” etc., in Android’s signature green color. People are also shown interacting and interspersed with animated characters (which can be created with an “Androidify” app to personalize their experiences).

As the minute-long ad continues, the title cards include many of the brand names (HTC, LG, Samsung) that employ the Android operating system, as well as the many products that use it (including Google’s new Nexus phone). The spot ends with the title card, “and you,” before switching to “android,” and the “Be together. Not the same tagline.”

The company has also released a number of animated ads that feature animated “Androidified” characters. In one ad, a group of characters is waiting for a bus when a phone starts to ring. After several rings, the shortest character answers a massive Android-powered phone and begins laughing, sparking the others in the group to laugh as well. “All kinds of phones, for all kinds of folks,” reads the onscreen text. Other animated ads featured characters coming together in a massive dance party and a group traveling on a road trip in a Winnebago.

Google did not respond to an e-mail requesting comment on the new ad campaign. On Google’s official blog, however, Sundar Pichai, SVP, Android, Chrome & Apps, wrote (in a post titled “Be together. Not the same,” announcing the new Lollipop update): “Good things happen when everybody’s invited. A few years ago, we had the thought that phones (and stuff that hadn’t even been invented yet like tablets and smart watches) would be way more interesting if everyone could build new things together. So we created Android as an open platform, and put it out there for everyone to imagine, invent, make, or buy whatever they wanted.”

The effort is clearly a shot at Apple, which has a passionate following behind its products in a way that Google can only dream about, says Chris Matyszczyk, creator of the Technically Incorrect blog on CNET. “Apple [is portrayed] as this clod of cultists, while Android is for everybody,” Matyszczyk tells Marketing Daily. “You can understand why they want to do this. Google doesn’t have the cool or cache of Apple.”

One hurdle Google will have to overcome is Android’s open-source nature. While Android connects many products, Google has limited control over how it’s used, or if it’s being used well. That may change with the current upgrade, which could also account for the timing, says. Jack Wallen, a contributing writer at TechRepublic (who in early October penned a piece advocating for an Android-specific marketing campaign).

“Starting with [Lollipop], there’s going to be a lot more quality control involved, so you’re not going to have carriers and providers with their hooks in it,” Wallen tells Marketing Daily. “Lollipop is going to be more strict than any other release.”