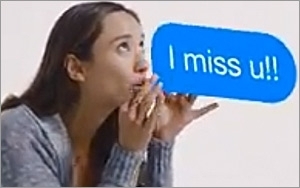 Facebook has launched a two-city test advertising campaign for its Messenger mobile application, in an attempt to show how it is better and more engaging than simple text messaging.

In a television commercial that began airing this week in Los Angeles and Chicago, two people are shown side by side as they use different techniques to express their love for each other, to the soundtrack of Elvis Presley’s “Can’t Help Falling In Love With You,” performed by a group called Twenty one pilots.

As the ad begins, the woman inflates a text balloon with the words “I love you,” and sends it over to the man. The man responds by creating an audio recording of a kiss and sends it back. She responds with a video of her puckering up, and he follows with a photo of the two of them together. They then start passing animated characters to each other as they each lift off the ground and turn to face each other holding hands. On-screen text reads, “Say love you better. Say anything better,” before revealing the Messenger app icon.

The effort, which will include TV, cinema and out-of-home advertising (to make its appearance in November), is designed to build awareness and showcase the utility of Messenger’s enhanced communication abilities, a Facebook representative confirms.

The representative says the campaign is a testament to the company’s commitment to the Messenger app, which is a stand-alone platform separate from Facebook. Facebook founder and CEO Mark Zuckerberg earlier this year told the New York Times that the company was looking for ways to unbundle services from its mobile app to provide a variety of different touch points for consumers.

“On mobile, people want different things. Ease of access is so important. So is having the ability to control which things you get notifications for. And the real estate is so small. In mobile there’s a big premium on creating single-purpose first-class experiences,” Zuckerberg told the New York Times in April.

In June, Facebook hired PayPal president David Marcus to run its Messenger unit, prompting speculation that the company was exploring ways to monetize the communications platform as a payment system. The campaign could also be a way for Facebook to establish more real estate on a mobile platform in ways that its “Home” button on some Android phones failed to manage, says David Cohen, editor of the AllFacebook blog.

However, there may also be some damage control behind the new campaign as well, Cohen adds. Earlier this year, Facebook switched its utility, requiring mobile users to install Messenger on their phones if they wanted to take advantage of instant messaging with Facebook friends while on the go. “There was some overhyped blowback when they forced people to go on to Messenger,” Cohen tells Marketing Daily. “It seems to be more of a goodwill effort for them.”