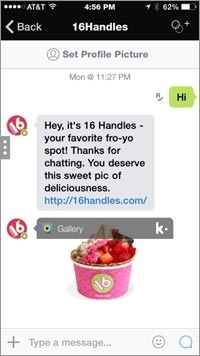 If the game is about following the eyeballs and the attention spans, then messaging apps are the hot place to be this year. But just as in the early days of traditional social networking, brands and providers are testing an array of models for inserting themselves into these worlds without violating users’ personal space and hijacking a medium that is supposed to be about peer-to-peer conversation.

The Kik apps has tested a number of methods of bringing marketers into the conversational flow. The app has an embedded browser for accessing links as well as promoted accounts in discovery areas. Since the summer, however, the app has been testing branded accounts that give a company their own Kik username so they can talk to other members just like anyone else in the system. About 20 brands have already signed on to the beta version, including Weinstein Company, Funny or Die, and Moviefone.

The self-serve frozen yogurt chain 16 Handles is among the beta testers because Kik is right in line with e teen demo the company is targeting. “We are always looking for a way to engage with users and jump on new platforms that resonate with our audience,” says Lara Nicotra, associate manager, social media and digital marketing. The company was among the first to use Snapchat in a campaign that sent coupons to members while they were in the store.

She says that part of the challenge is that on established platforms like Facebook, “impressions aren’t what they used to be.” Messaging apps give the brand a one-to-one communication opportunity that is not easily overlooked or missed as in social feeds. These are direct messages that go to the opted-in user much like SMS.

16 Handles has generated over 27,000 chatters with just a small amount of paid media within Kik and a lot of sharing from a solid base. She admits that in these early stages buying a seed audience in many of these messaging apps is relatively cheap compared to other options. “It is a good time to start acquisitions while the costs are still quite low,” she says.

The paid promotion within Kik is “pretty subtle,” says Paul Gray, product strategist, Kik. When users look to start a conversation and consult a recent history screen, “there is a promoted brand in that space -- done on a bid model. We want to pace ourselves.”

When a user follows the brand they get an auto-reply message from 16 Handles. “You can change out a reply message one a week, so if a user wants to talk more you can serve a different promotion,” says Nicotra. “Every week we send a broadcast message to the entire list.” This is where 16 Handles is getting more creative. A recent broadcast used the “who wore it best?” format with topped frozen yogurt. Kik followers were asked to vote on “Who Handled It Best?” and the company received over 2,000 replies in 24 hours. “We also tested it on Facebook, Twitter and Instagram, and only got about 35 votes on Instagram. Kik was the winner for us with one-to-one conversations."

Gray says they have been giving brands guidelines for working the platform in order to respect users. While other social channels and the feed-based approach may encourage greater volume to ensure being seen in any given day, “everyone gets the message” in this format, so brands need to be more restrained.

For the time being, these reply and broadcast messaging options are sending the same message to all followers. Gray says that scaling real one-to-one conversations can be very challenging, but he expects that we will see differentiated and targeted messaging soon help make the conversations feel more personal. The next obvious evolution would messaging that targets by segment or even answers common questions. Nicotra imagines that at some point the system will be able to recognize questions and tell users what flavors the stores are serving today or even serve up games.

Clearly, Kik and other messaging app users are in a talkative mood when in these apps. Gray tells us that the average active user is spending just under 100 minutes a week in the app and sending 71 messages on average per day. The company is not revealing its MAU base, but claims 150 million registered users.