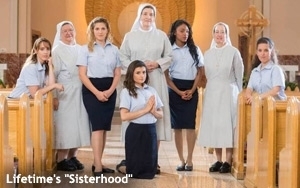 I hereby declare myself the first to recognize the arrival of a new programming trend. In a word: Nuns.

The first and most solid evidence that TV has identified the world of nuns as a new realm ripe for programming picking was the announcement I received this week from Lifetime Television about a nun reality show.

Titled “Sisterhood,” this show will feature five young women who are in the exploratory stages of becoming Catholic nuns. The show is scheduled to premiere on Tuesday, Nov. 25, for a six-episode run on Lifetime -- a network known for reality TV shows ranging from the elegant “Project Runway” to the train wreck of “Dance Moms.”

This new nun show is from the same producers who make “Breaking Amish” for TLC -- an outfit called Hot Snakes Media. The press release did not go into detail about the process by which a company called “Hot Snakes” happened to come to an agreement to film a reality TV show at three Catholic convents.  For the record, they are: the Carmelite Sisters for the Aged and Infirm, Germantown, N.Y.; the Daughters of St. Mary of Providence in Chicago; and the Sisters of St. Joseph the Worker in Walton, Ky.

“Audiences will get a special glimpse into a world that has rarely been seen [on TV] as they meet the sisters and really get to know their joyful, down-to-earth personalities,” Lifetime’s press release said. “In their own words,” the release continued, “they work hard, pray hard and play hard.”

It’s tempting, as always, to be skeptical about a reality show about nuns and come up with all kinds of funny names for it (“Nunzillas,” anyone?). But I’ve often said that one of TV’s greatest strengths is its ability to take us places we would not (or could not) ordinarily go ourselves. So if Lifetime wants to take us to the formerly closed world of nuns and the young aspirants who hope to join them, then who am I to complain?

The day after this announcement arrived came news that Kyra Sedgwick would produce and star in a comedy series for HBO about a nun. The show doesn’t seem to have a title yet, but the Sedgwick character will reportedly be a woman of a certain age who had been a nun since age 17 but has left the order to find something new in her life.  Her collaborator on the show is Kari Lizer, who created and produced “The New Adventures of Old Christine” with Julia Louis-Dreyfus.

There was no word on when this nun comedy would air, but we should still take it as a sign that TV has discovered nuns, and means to explore their world -- whether through reality television, scripted comedy or, inevitably, a scripted drama.  Remember, you heard it here first.