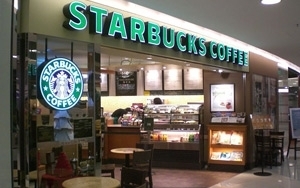 Starbucks is upping the ante in mobile. The nation’s coffee shop plans to introduce a food and beverage delivery service in select markets in the second half of 2015, CEO Howard Schultz announced during the company’s earnings conference call Thursday.

Offering delivery is the latest step Starbucks is taking to build on its much-publicized success with mobile payments and broader effort to keep up with consumers who are increasingly shopping and browsing online through their devices. To that end, the company is rolling out mobile ordering in December in Portland before expanding it nationwide next year.

People will be able to order their pumpkin spice lattes and caramel macchiatos ahead for pick-up to avoid waiting in line. Schultz called the company’s new Mobile Order and Pay service the “single most important technology innovation” it will launch this year.

But Starbucks isn’t really ahead of the curve here. Papa John’s has been offering mobile ordering for years, and other quick-serve restaurants such as McDonald’s and Burger King are either testing or rolling out the service. This week, Taco Bell launched a high-profile campaign -- going dark on social media and its Web site -- to promote its new mobile ordering app.

Still, Starbucks is usually Exhibit A when it comes to operating a smooth system for in-store mobile payments. In the earnings call, Schultz said that the 7 million mobile purchases now account for 16% of all its U.S. transactions per week, well ahead of other brick-and-mortar retailers. And that figure has been growing by about 50% a year.

“We’ve accomplished this by integrating the convenience of mobile payment to a compelling and enjoyable program that gives our customers rewards,” noted Schultz. In other words, linking its mobile app to its rewards program has been a key to customers’ embrace of mobile payment.

Among other new mobile offerings, Starbucks has recently added digital tipping (of baristas), and in its iOS app, integration with Uber, allowing users to order a ride to a Starbucks outlet. What about Apple Pay? Starbucks offers the in-app version of the new Apple mobile payments service but its stores don’t currently support the near-field communication (NFC) technology needed to process transactions made using Apple Pay.

Given the long-standing relationship between the companies, It will be interesting to see whether Starbucks eventually updates its terminals to accept Apple Pay purchases or not. After all, the company has a good thing going with its own system, so why switch? And consider Starbucks last year entered into a partnership with Square but never really supported the startup’s mobile payments app, which it has since killed.

Certainly, Starbucks wants to keep its own app as the center of customer’s mobile interaction with the brand. That’s likely true of the forthcoming order delivery service as well. “Imagine the ability to create a standing order that Starbucks delivered hot or iced to your desk daily -- that’s our version of e-commerce on steroids,” said Schultz.

But the test for the company is actually delivering on the promise of mobile ordering and to-your-desk delivery in the coming year. If not, its on-the-go customers will surely let Starbucks know.