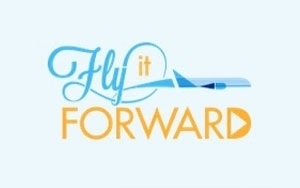 JetBlue Airways  is introducing a new program called “Fly It Forward” that enables customers to spread goodness from one to the next.

The program is inspired by the airline’s crewmembers and carried on by customers passing along one ticket on a continuous journey throughout the JetBlue network.

JetBlue and its ad agency, Mullen, developed the program with the goal of creating a tangible manifestation of the brand's mission — to inspire humanity. To celebrate the launch, JetBlue released a video featuring the first four fliers to participate in the program.

Highlighting the virtues of the program, the video also calls for the public to submit their own nominations for deserving travelers for the next fliers to choose from so they can continue to Fly It Forward.

Consumers can follow the stories as they unfold at jetblueflyitforward.com and help write the next chapter by submitting their own entry or by nominating a story through Twitter using #FlyItForward.

The Fly It Forward site will be the hub of all conversations and activity, documenting each flier's story and encouraging consumers to share their nominations. Twitter serves as the lead social platform.

New winners will be selected by the previous fliers and announced every other week as the Fly It Forward ticket travels across the JetBlue network.

It's easy to get caught up in the mechanics of travel and overlook the reasons why people travel, says Marty St. George, JetBlue's senior vice president of commercial.

“Everyone travels for their own reasons,” St. George says in a release. “It's those stories, those connections with individuals that inspire us all."

JetBlue looked to its crewmembers for stories of potential Fly It Forward nominees. They have enabled the ticket to travel between four fliers from Chicago, New York, Seattle and Haiti.

Stories span the themes of inspiration, resilience and perseverance, the pursuit of one's passion, and dedication to youth education and community relations.

One of the featured fliers includes Louis Elneus, who established the first public library in Haiti. Nominated by crewmember Jay Sequiera, Elneus returned to Haiti to deliver new books for the start of the school year as he continues to inspire youth education and literacy.