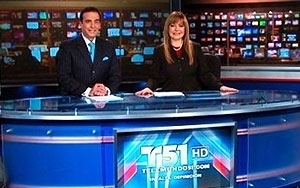 NBCUniversal is moving to expand the local news operations at 17 Telemundo stations across the U.S., the company announced this week. The investments at the Telemundo Station Group include launching new Spanish-language newscasts, updating journalists’ equipment, and adding consumer units that will represent consumers’ rights with investigations of products and services.

Leading the way is a new half-hour early evening newscast, with local breaking news and weather reports, set to launch Monday evening in 14 markets. The new newscast will air at 5:30 pm EST and PST, and 4:30 pm CST and MST. Telemundo has also added additional evening and morning weekday and weekend newscasts in seven other markets, and hired 160 new employees -- most of them in news departments -- to support the expansion.

The broadcaster is adding news bureaus in Washington, D.C., Mexico City, and Miami, allowing stations to offer a local slant on national and international news, and introducing digital editors at each station to expand their online reach.

Local news operations in Los Angeles, Miami, Dallas, Phoenix and elsewhere are also getting a makeover with new sets. All 17 stations are getting new graphics and visual designs for their broadcasts.

In markets where there is also an NBCU-owned station, the Telemundo and NBCU stations will pool their content and resources, with cooperative efforts planned in Los Angeles, New York, Miami-Fort Lauderdale, Dallas-Fort Worth, Chicago, San Francisco Bay Area and Philadelphia.

Telemundo is muscling up with new programming to better compete with rival Univision and new digital-first players. Last week, it announced that it was taking over the Spanish-language broadcast rights to FIFA soccer events, beginning in 2015, in anticipation of the 2018 Soccer World Cup.