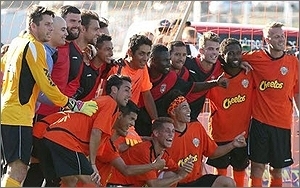 Countless brands invest in all kinds of sports sponsorships. But Cheetos has taken a decidedly novel approach by launching its own, branded exhibition soccer or fútbol team as a platform for expanding its already large Hispanic customer base.

Actually, the brand has created both an exhibition team called Los Cheetahs, which it describes as "The Harlem Globetrotters of soccer," and an opposing team that plays their no-nonsense foil, dubbed Los Jefes.

Cheetos' marketing — featuring the mischievous adventures of its mascot Chester Cheetah — positions the snack as adding an additional, fun twist to families' playtime together. Exhibition soccer is a twist on the sport and, surprisingly, no one else was yet hosting such events in the U.S., Jeannie Cho, senior director of marketing for PepsiCo's Frito-Lay, tells Marketing Daily.

Hispanic households buy 50% more Cheetos than general-market households, and drive 16% of the brand's total volume, according to IRI data cited by Frito-Lay.

Cheetos held an open audition to find players skilled at amazing soccer moves and tricks, who also demonstrated the ability to work with team members and some comic flair, says Cho. Some of those chosen have other careers, like acting or accounting, or have played in international soccer circuits.

A bonus draw, at least for this debut game, was retired Mexican soccer player Jorge “El Chapulin” Campos — one of Mexico's top players in the '90s — who played goalie for Las Cheetahs and signed autographs for fans.

Attendance was free, but consumers needed to register in advance on Cheetosfutbol.com to qualify for "premium" seats in the grandstand. Showing a bag of Cheetos snacks of any size also served as an admission ticket.

To drive awareness and attendance, Cheetos employed social media, in-store displays and sampling/autograph signing events outside of stores in the Los Angeles market, PR, digital ad banners, and a launch video (now featured on the program's site) with media support.

The first game — held in a pop-up stadium on Los Alamitos Beach in Long Beach, Calif., on Nov. 8 — drew an estimated 3,500 attendees, maxing out the venue, reports Cho.

She also reports enthusiastic response from the crowd throughout the event, including the response to interludes during the game in which attendees were chosen to come onto the field to participate and interact with the team, and to the introduction of characters into the action, including Chester and a woman playing the sister of one of the players.

Chester also entertained at half-time and posed for snaps with families all day. "If anything, we learned that people would welcome an even bigger Chester presence," she says.

As hoped, the event also generated significant sharing and social interaction, with 3.5 million followers reached via tweets (common hashtags on Twitter, Facebook and Instagram included #cheetosfutbol, #loscheetahs, #cheetos and #jorgecampos); 13 million online video views among Hispanics in the L.A. market; and nearly 96,700 visits to the event site from more than 55,900 unique visitors, according to the brand.

The success of the inaugural event has ensured that Cheetos will go ahead with a tour stopping in select markets around the country in 2015, but those plans (including whether Campos will be on board) are still being finalized, says Cho.