Lexus Rolls Into Christmas With Latest 'December To Remember' 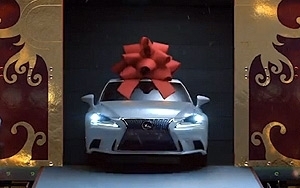 Lexus is driving into the automotive Gettysburg to join the pitched battle for year-end sales volume, red ribbons waving, and “December to Remember" on its standard. The campaign inserts Lexus cars into traditional holiday imagery of toys, elves, Santa and snow.

The campaign includes three general market commercials playing on — what else? — gift giving. In each ad, a Lexus is delivered by elves or by Santa, and the following morning we learn that the delivery is a parent’s own fantastical description of how the car came to be at their driveway.

One ad shows a red freight train that rolls through a snowy landscape into a neighborhood, stopping in front of a house. Holiday elves unload a Lexus IS F sport sedan from one of the cars. Cut to the next morning as the mom finishes the fabulist’s explanation of how the car arrived.

In another one, Santa puts a box on a neighborhood driveway. The box opens, then transforms into a Lexus ES sedan. Again, it turns out to be an elaboration on a father's narrative invention on how Santa delivered the car (rather than the dealership.)

In the third spot there's even a teleportation machine, which the elves use to send a Lexus car to another family. The ads end with: “The magic of the season is here, at the Lexus December to Remember Sales Event.”

Lexus is running the campaign, via AOR Los Angeles-based Team One, on rotation on network and cable television, sports channels and other channels. The train-themed ad will be translated for Hispanic and Asian-American markets.

Lexus says print uses “Perfect Garage Stuffers” as a headline. And there's a tie-in with The Weather Channel where December Sales Event ads will be delivered in real-time based on local weather, per Lexus, which says ads will run on the auto vertical Web sites, with OOH in DC Gallery and Times Square.

At the Los Angeles Auto Show, the brand is showing a new compact crossover, the 2015 NX, which happens to have the first turbocharged gas engine for the brand and the first Lexus vehicle in the segment.  And there’s also a hybrid version, making it Lexus’ sixth such vehicle in the lineup.