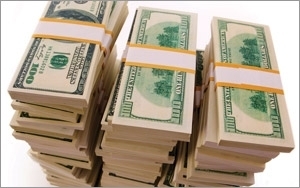 Some believe the "cracks" in Google's search monopoly are finally beginning to show. The latest was announced Wednesday. The deal makes Yahoo the default search engine for the Mozilla Firefox browser, breaking up a decade-old relationship between Mozilla and Google.

The financial gain in searches could mean billions of dollars for Yahoo, according to one optimist. "I estimate that this deal will add $2 billion to $2.7 billion of revenue to Yahoo per year, and $2.3 billion to $3.1 billion if Yahoo terminates its search engine deal with Microsoft next year," writes Nathan Rapport.

At least one analyst (probably more) believes "billions" is way too high.

How did Rapport come to this conclusion? Google's desktop advertising revenue is estimated at $10.85 billion for this year. Given that Google has about two-thirds of the desktop search market locked up, the entire desktop search market is worth around $16.2 billion. Assuming that Firefox users perform roughly the same number of searches as Chrome and IE users, that means the Firefox market is worth about $2.3-$3.1 billion to Yahoo. After subtracting Microsoft's cut, Yahoo would be left with $2-2.7 billion in revenue. Of course, not all of that would be profit. Assuming that Yahoo's deal with Mozilla is similar to Google's, Yahoo will be paying at least $300 million of that back to Mozilla.

Rapport explains that without Firefox, Yahoo receives about 10% of desktop searches, but with Firefox the number rises to one quarter.

Still, Yahoo faces an uphill climb. Firefox held 10.4% of the U.S. browser market on desktop PCs, mobile smartphones and tablets in October, but Google's Chrome browser led with 33.5%, per StatCounter.

By the way, since the analysis was too interesting to pass up, it's important to note that Rapport works in technical services at Epic, but has a degree from Ohio State and University of Wisconsin-Madison.

"Stacks of Money" photo from Shutterstock.