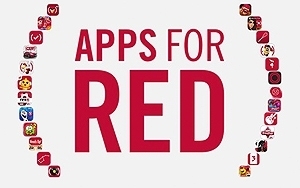 Getting into the giving spirit, Apple plans to donate a portion of sales from its App Store to the Global Fund to fight AIDS initiative, over the next two weeks.

For the effort, Apple has created an Apps for (RED) section within its App Store, which include 25 apps from Angry Birds to GarageBand.

CEO Tim Cook described Apple as a “proud supporter of RED” -- an organization founded in 2006 to fight Aids around the world by partnering closely with consumer brands from Apple to American Express to Nike to The Coca-Cola Company.

“For eight years, our customers have been helping fight AIDS in Africa,” Cook said in a statement.

Through December 7, every time a customer purchases a participating (PRODUCT) RED app or an exclusive in-app purchase, all proceeds will go to the Global Fund.

On Black Friday, Apple will also be offering its US customers a special edition (RED) iTunes gift card with the purchase of select Apple products, and then donate an undisclosed portion of the proceeds to the Global Fund. Then, next Monday — World AIDS Day — Apple plans to donate an undisclosed portion of every sale at Apple’s retail and online stores to the Global Fund.

To date, Apple has already raised $75 million to fight Aids, according to Bono, U2 front man and the co-founder of (RED).