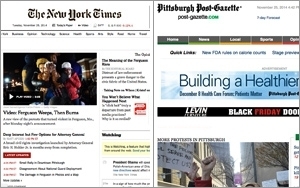 October was a record-setting month for newspapers online, with 166 million U.S. adults consuming newspaper content delivered via digital platforms, according to the Newspaper Association of America, citing figures from comScore.

That is an increase of 24 million, or 17%, over October 2013, when 142 million adults consumed digital content from newspapers.

Over the first 10 months of the year, monthly digital audiences for 300 U.S. newspapers tracked by comScore increased by around 20 million, the NAA said.

In proportional terms, eight of ten online adults accessed digital content from newspapers in October 2014. The proportion was even higher for subgroups including women ages 25-34, where 91% visited a newspaper digital property, and men ages 35-44, where it reached 84%.

On the other hand, online paywalls seem to be having a positive impact on the bottom line, with circulation revenues up 3.7% to $10.87 billion. That’s not far off the peak value of $11.2 billion achieved in 2003, before print circulation entered a precipitous decline.

Over the last decade, total newspaper advertising revenues, including digital, have fallen from $49.4 billion in 2005 to $23.6 billion in 2013 -- a 52.2% drop. The annual figures for 2013 are the most recent available, following the NAA’s decision to stop reporting quarterly revenues last year.