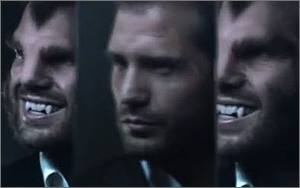 Three Olives — "The London Vodka" — is switching from suave British actor Clive Owen to a suave British werewolf-about-town for its latest campaign focusing on its core, unflavored vodka.

The new campaign, from The Via Agency, includes a three-minute-plus music video and three 30-second videos/TV spots directed by Anthony Mandler, best known for his music videos for Rihanna, Jay-Z, Taylor Swift and other major recording artists.

The creative, shot in London, shows a handsome "werewolf in disguise" ordering Three Olives martinis and coming on to beautiful women in atmospheric bars and penthouses.

The theme music is a sexy cover of Warren Zevon's “Werewolves of London” by Masha Shirin, who has built a substantial following on YouTube and other social media platforms through her covers of songs by Rihanna, Maroon 5 and others, and is currently shopping her first album to various record labels, Greg Smith, chief creative officer at The Via Agency, tells Marketing Daily.

Three Olives secured the rights to the Zevon classic to have Shirin record her version, and yesterday made the song available for free download by up to 150,000 of its Facebook followers.

The video creative will start to be viewable on Three Olives's Facebook and YouTube channels on Dec. 2. The brand will also be paying to seed the videos on BuzzFeed, MrPorter, Devour and other sites and blogs, and will offer video teaser snippets on Instagram, Smith says.

The first TV spot, Overheard, will begin airing widely on Dec. 8. Smith says that the campaign is targeted to a 25-to-35 audience, and that the creative "takes the typical Three Olives Vodka drinker to the extreme, creating a protagonist whose polished exterior belies the beast within.”

Still, he also says that it isn't particularly skewed to males, particularly in comparison to many spirits campaigns. The television schedule — which includes ESPN and other sports programming but also AMC, TNT and USA Network — is "pretty gender-neutral," he says.

Privately owned Proximo Spirits, which acquired Three Olives from Pinnacle in 2007, has heavily invested in the brand, which it reported was on track to sell 1.5 million cases last year. In fact, according to Proximo, Three Olives was, as of last year, the fastest-growing super-premium vodka.

But most of the focus has been on expanding the brand's flavor-infused varieties, which now number more than 20 (including novel flavors like grape, whipped cream and root beer). That focus isn't hard to understand, given the explosion of flavor-infused vodkas, which more than doubled their share of the U.S. market, to 26%, between 2007 and 2012, according to Euromonitor International.

But last fall, Spiros Malandrakis, Euromonitor's senior alcoholic drinks analyst, reported that the sales stats were showing that non-flavored vodka sales were already declining due to cannibalization by the flavored versions, and predicted that the short-term boost provided by the latter would soon begin to fizzle. Further, Restaurant Sciences LLC reported that on-premise sales of flavored vodkas fell 11.7% between the third quarter of 2012 and the same period in 2013, losing nearly 1% of their on-premise market share, and that most flavored vodkas were experiencing on-premise sales declines, with some category leaders, such as Three Olives and Stolichnaya, down more than 20%.

Smith says that flavors are still "doing well" across all spirits categories, but acknowledges that they tend to be "ephemeral," so distillers keep coming up with new flavors to maintain momentum.

Last year, Three Olives began shifting toward stressing the brand's British heritage (it's distilled in the U.K., from wheat harvested in England) and the quality of its non-flavored core brand in its advertising. It invested $20 million ­— its biggest spend to date ­— on the Clive Owen campaign, which ran in print, digital and out-of-home.

Smith describes the new, werewolves campaign as returning to the brand's roots and addressing any brand confusion resulting from the plethora of flavors. After all, the name Three Olives came from its use in martinis (which are heavily featured in the videos), he notes. However, he says, the brand believes that the campaign will also benefit sales of the flavored varieties.