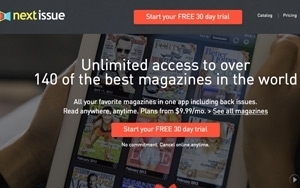 Next Issue Media, the company created by a consortium of big publishers to market digital magazines, has raised $50 million in a new round of funding from KKR, an investment firm, the company announced this week. The investment will be used to expand Next Issue’s digital magazine platform and make its unlimited access subscriptions available to a wider audience.

Currently, Next Issue’s tablet and smartphone app gives subscribers access to 145 popular consumer magazines, including iconic titles like People, Vogue, Better Homes and Gardens and Esquire, for a flat subscription price of $9.99 per month for monthlies, and $14.99 for monthlies and weeklies.

The app also incorporates a variety of interactive content including video, photo galleries, Twitter feeds and live Web links. Next Issue plans to add new capabilities in 2015, including new tools for content search, discovery, and sharing.

Richard Sarnoff, managing director at KKR and head of the firm’s media & communications investment team in the Americas, stated: “Today's consumer demands mobile access to large catalogs of premium content, anytime, anywhere. Next Issue's proven success applying this model to magazines has created a compelling consumer proposition that will serve the interests of readers, publishers and advertisers alike.”

Strategic moves in recent months have suggested Next Issue is preparing to embark on a major expansion. In September, the company hired an advertising agency, Eleven, to help raise consumer awareness of its digital magazine offerings and grow its subscriber base. To that end, Next Issue is planning a multiplatform campaign with TV, digital, and print components.

Next Issue was formed by Condé Nast, Hearst, Meredith, News Corp. and Time Inc. in 2009, in order to raise the profile of digital magazines and scale up the marketplace.