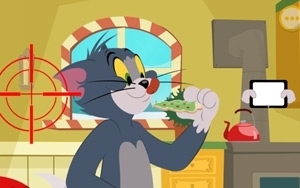 One of the most interesting aspects of new media platforms is the way they pilfer, mash-up and appropriate old and forgotten formats as they lurch their way toward new modes of expression. Early film tried to mimic the Victorian parlor drama before discovering chase scenes and psychological realism. TV relied heavily on long-dead vaudeville (and even near-dead vaudevillians) before situation comedy and short-form drama became its early staples.

Apps are going through such a stage now, with gaming having emerged as the early signature form. But there is so much more than Angry Birds here still waiting to happen. And so I took special interest in the new Tom and Jerry: "Santa’s Little Helper" “appisode” from Warner Bros. Digital and the development house Plumzi. Using the familiar characters and visual tropes from the MGM Tom and Jerry toon by Bill Hanna and Joe Barbera of the '40s and '50s, it deftly turns a decades-old cartoon format into an interactive appisode sold for $5.99 in the iOS app store (Android coming). It represents an interesting way to price and distribute media and an even more intriguing narrative exercise.

As founder and CEO of Plumzi Guillaume Cohen tells me, the company has developed a process of ingesting original cartoon footage (in this case a holiday DVD release of the cartoon cat and mouse duo) and adding interactivity that lets the user move the action along. “We created it out of the realization that our experience with cartoons has been the same for 80 years,” he says. He contends that the interactive generation wants to do more than lean back and absorb content: “If it doesn’t react to your swipe or touch, it feels like it is broken to them.”

In this appisode Plumzi finds opportunities for interactivity in the existing cartoon storyline. The user might have to move objects around the screen to complete the scene, or tilt and shake the device to activate backgrounds.

In many ways the classic cartoon is ready-made for such interactive overlays. While the best theatrical cartoons always had a seven-minute story arc of some sort, practitioners like Hanna and Barbera, Disney and Tex Avery thought in terms of short scenes and visual gags within the scenes. The Plumzi process takes eight to 12 weeks of planning and integrating interactivity into existing cartoon sequences. The company has done this previously, working with Nickelodeon on "Dora The Explorer" as well as on "Veggie Tales" with Dreamworks.

Having played through much of the appisode, I have to say the integration is remarkably well done. The cartoon itself is a great homage to the Hanna/Barbera classics, with visual tropes and background music all recreating the feel of a theatrical cartoon.

Cohen tells me the interactivity is not an easy process of slapping in touch or shake sequences at will. “Unlike games, this is driven by the story, not gameplay. You have to be sensitive to story arc and the pace of the story.”  Too many interactions ruins the overall flow of the experience, for instance. And it needs to make users feel as if they are part of the action and not just being handed busy work to maintain engagement.

And so Plumzi does a lot of kid testing, with six to twelve youngsters coming in early in the process to play with the design. The company also uses in-app analytics to understand how the kids are interacting with appisodes over time, the sequences where they dwell longest and interact the most.

Interestingly, Cohen does not think the interactive cartoon would fit feature-length projects, largely because the pace and story arcs of these 90-minute and longer epics are much slower in order to build character. There aren’t the same opportunities for interaction in this aesthetic structure. The compressed narrative of cartoon shorts and their reliance on visual gags makes one of the oldest forms of theatrical filmmaking an unexpected but marvelous fit for the time frames and interactive types available to the app.

So far Plumzi has partnered with studios like Warner Bros. Digital on familiar kids' cartoons because this audience and their parents are the most likely early adopters of such novel formats in an appisode distribution system. But there's nothing precluding this app-toon format from migrating to more adult fare. Anyone recall the great Tex Avery’s wartime cheesecake classics like "Red Hot Red Riding Hood" and "Swing Shift Cinderella"? These would be irresistible opportunities for interaction. How about letting us all torture Daffy Duck even more than Chuck Jones did initially in the inspired "Duck Amuck"?

The trove of media history is deep and diverse. In the early stages of any new form like apps, we see the most innovative minds reaching back into the corners of that history for inspiration and new ideas. Just like early film, radio, cartoons, and TV, few people now think about the mobile app as a nascent art form with its own native aesthetic effects and capacity to entertain and inform. But somewhere in these little iconic squares there is an art waiting to blossom.