Court Throws Out 'All Natural' Labeling Suit Against Dole 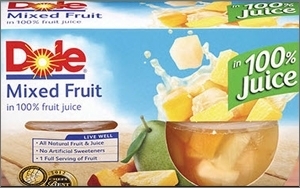 In the past few years, food companies have experienced a significant increase in lawsuits alleging that "all natural" or "100% natural" product claims have misled consumers.

And in many cases — such as a Kellogg's Kashi case that was resolved earlier this year — they have ultimately opted to settle these cases.

But the Food and Drug Administration's failure to date to define "natural" apparently doesn't always work in plaintiffs' favor.

Last week, U.S. District Judge Lucy Koh dismissed a suit against Dole Packaged Foods Co., granting Dole's motion for a summary judgment on the grounds that the plaintiff had failed to present sufficient evidence that the "all natural fruit" statement on some Dole products was likely to mislead reasonable consumers.

Chad Brazil, the consumer who brought the case, Brazil v. Dole Packaged Foods, alleged that "all natural fruit" was misleading because the liquid in which the fruit was packaged contained citric acid and ascorbic acid (commonly known as Vitamin C).

Dole argued that it used only natural fermentation in its fruit products, and that "all natural" was used to refer only to the fruit itself. It also argued that there was no evidence that reasonable consumers would consider the "all natural" claim to be "material" in their purchasing decision.

The judge stated that the plaintiff had offered no evidence that citric and ascorbic acid, "the two allegedly synthetic ingredients found in the challenged Dole products, would not normally be expected to be in those products." The evidence, she wrote, "is insufficient to create a genuine dispute of material fact."

The judge's ruling also specifically mentioned the lack of an FDA definition for "natural" in relation to packaged foods.