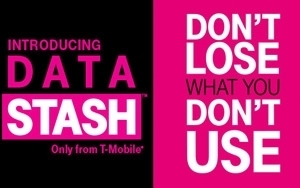 Continuing its “Uncarrier” mission of identifying, then relieving, consumer pain points, T-Mobile has unleashed its latest initiative (8.0, for those keeping track): data rollover.

Only don't call it rollover. In a live announcement on Yahoo on Tuesday morning, T-Mobile CEO John Legere repeatedly corrected host David Pogue, when referring to the initiative as rollover. (He later admitted, however, it’s really the same thing. “Stash is cooler,” Legere explained in a conference call with reporters. “‘Rollover’ is like a 1980’s term.’”)

“Today, we’re solving a pain point of staggering proportions,” Legere said in the call. He said the industry took in $1.5 billion in overage penalties last year, and as a result 40% of consumers purchase larger data plans than they actually need. “You bought it; it's rightfully yours,” Legere said. “We’re putting an end to this appalling industry practice.”

Like previous industry initiatives that would store unused voice call minutes for later use, Data Stash banks unused data into an account, to be tapped into when necessary for a year. The new feature will be included for every current and new T-Mobile postpaid (i.e., contract) customer. To promote the initiative, T-Mobile is gifting 10 GB of rollover-eligible data to every customer.

“We’re putting an end to this crazy practice. You don’t lose what you don’t use,” Mike Sievert, T-Mobile’s chief marketing officer, added in the call with reporters and analysts. “This is probably our biggest move since ‘Uncarrier 1.0,’ when we got rid of contracts in the first place.”

Supporting its ‘Uncarrier’ positioning of repairing an industry that’s not customer-centric, T-Mobile’s Data Stash initiative was spurred through reviewing customer complaints about the industry on Twitter, Legere said, adding that 40,000 Tweets last year were from customers asking for data rollover plans.

“This one was hiding in plain sight,” Legere said. “This isn’t rocket science. We just seem to be the only carrier in the country that’s listening.”