At Sears And Target, Caroling Makes A Comic Comeback 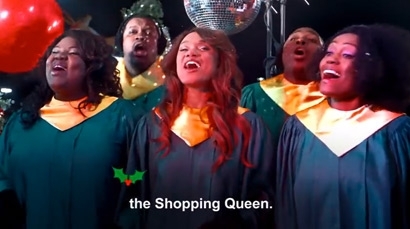 Both Sears and Target are reinventing the humble art of caroling this year, pushing clever videos out on social media channels this year. Sears draws its storyline from Twitter, swooping in on a perfectionistic shopper who is completely behind on her holiday shopping. Carolers lead her toward gifts that inspire booty shaking, sexy twinsies and courtesy of Craftsman, plenty of manly joy. Target, using a flash-mob mentality, surprises unsuspecting families with a caroling experience on steroids, complete with a 20-piece brass band, fake snow and dancing Santas.

For Sears, it’s the first holiday spot in the #MoreToYou campaign — launched earlier this year — “developed to surprise and delight real people based on actual Tweets,” says Jamie Stein, Sears’ VP/member communication. The idea of this online video series, she says, is to captures heartfelt emotional reactions while showing how Sears' retails services and products bring more to members: “This tactic gives us an incredible opportunity on Twitter to connect with shoppers on a personal level and deliver more of what they want.”

The caroling video — the seventh in the series, she tells Marketing Daily via email — “is a fun way to visualize social conversations and expand them into bigger emotional moments — in this case, funny moments.”

She says Sears is connecting with shoppers across eight different platforms, “creating personal connections with our social followers every day … it’s not just about making transactions, it’s about building relationships.”

Target, meanwhile, tapped Charlie Todd, founder of Improv Everywhere, and chose five families from a pool of more than 100. (The Schreibers  a family of five from Bergen County, N.J., are the ones who are shown in the video, and if you’re wondering how come they look so well dressed and surprised, it’s because they were told they were a Christmas card taken at a “home studio.”