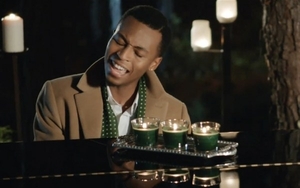 First introduced last year, Ross used scent to inspire his take on the song “This is My Wish” which is available again this year for free download.

Ross and the song are also featured in a 30-second Glade TV spot from Ogilvy & Mather entitled “Feel Anticipation.”

The Motown artist said he is inspired by things that take him back to a specific moment in time. Glade Sparkling Spruce reminds him of time spent with friends and family during the holidays and provided inspiration for his adaptation of the song, he says.

Glade is asking fans of the song and video to share the links on their social media pages with the hashtag #FeelGlade.

As part of his partnership with the SC Johnson brand, Ross recently visited the Glade pop-up boutique in New York and performed the song. The boutique features a multi-sensory, immersive and interactive experience for shoppers and will be open through the holiday season.

Guests are also invited to engage with Glade fragrances with a visit to the "Scent Lab." The "Scent Lab" features a candle wall housing 1,500 back-lit scented candles that form an artistic mosaic design.  For those unable to experience the scent-inspired boutique first-hand, a 60-second behind-the-scenes video and a walk through of the boutique is available on the Glade YouTube channel.