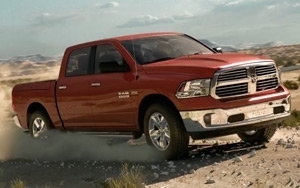 Trucks are going to kick the year over the finish line, with General Motors and Chrysler getting the most benefit, because the top-selling vehicle in the U.S. for over 30 years, the F-150, is shifting from old to new.

Edmunds.com senior analyst Jessica Caldwell said sales are being driven by low gas prices, a record stock market and the improving economy. It also helps that it has been a mild month in terms of weather. Edmunds sees General Motors gaining by 13.9% versus last year; Toyota gaining 15.1%, and Chrysler by 24.6%.

Edmunds predicts Hyundai and Kia combined will enjoy a 9.7% improvement. But everyone except General Motors and Chrysler will lose market share, with Ford getting the biggest share loss, at -1.1%. However, that may have as much to do with anticipation for the new F-150 keeping buyers out of the truck market.

But Ford is still number two in overall share — just a nick above Toyota, at around 14% share — versus number one at about 17% share, per Edmunds. Chrysler is number four, with about 13% share per Edmunds.

Kelley Blue Book notes that Fiat Chrysler's predicted double-digit sales growth this month will be its tenth in a row. The digital shopping and research channel notes that Chrysler is benefitting from strong demand for its truck divisions — Jeep and Ram — whose products could help drive the company's volume to over 2 million sales leading to its gain of 1% share of the U.S. market. KBB.com says Toyota's year was pretty much in line with the industry, but has an enduring lead in its traditional spot — having the top three selling cars, including Camry and Corolla, which are up 5% and 11% percent respectively this year. Toyota’s Prius has also been the top-selling car in California.

The firm also says full-size trucks will have a strong December because of fuel prices being at a five-year low. Said Alec Gutierrez, senior analyst for Kelley Blue Book: "Even though the F-Series is down 1.4% on the year, the segment is expected to grow 6.7% this year and top 2 million units for the first time since 2007.” Ford is gearing up to launch a major campaign for the truck as well.