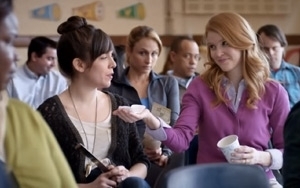 The most-read under my byline was Procter & Gamble’s “Smellcome to Manhood” campaign for Old Spice’s once-a-day Body Spray, aimed at younger people. The campaign idea came from research on overuse of hygiene products.

The pitch: when you overuse, you become a man too soon. The campaign, via Wieden+Kennedy, had moms appearing in downright creepy ways and places to bemoan their sons' early maturity. One mom plummets from the sky, another emerges from that dark place at the business end of a bowling alley. Another one washes ashore like that girl in "Jaws" but intact.

SEMA is CES for cars, and like CES, it's really industry only. The second-most read piece was a column on this show (the Specialty Equipment Market Association's yearly Vegas confab), and how it's about time it opened its doors to the public. Trucks are a big focus, but so are cars from Toyota, Nissan, Mazda, Honda, and pretty much all the others. That shift has made modifications sexy. And for automakers and their SRT, SVT, AMG, M, Mazdaspeed, F, NISMO, SS performance sub-brands, it has become a mandatory event. Why not let the people see the cars and products, even if many are design exercises and concepts?

Early in the year, Defy Media came out with its second annual Acumen Report: Brand New Man, which found that men are more involved with household shopping. This story covered those results: 65% of the 2,000 18- to-49-year-old males surveyed said they now hold primary shopping responsibility for several household product categories. Sixty-seven percent said they enjoy shopping for the household, and close to 63% said they are open to choosing new brands.

A story on Millennials’ shopping habits around social media got a lot of reads, although the data should be no surprise: younger consumers are big on ads, and they listen to dads (and moms) when it comes to researching products. Mom Central's Consumer Insights Groups, which polled 1,100 women born between 1979 and 1993, finds that Millennial women take and give advice, including to parents, particularly with new technology.

It's fair that people still like sinister British types. Jaguar this past spring added a chapter to the "British Villains" campaign with “The Art of Villainy,” which starred Tom Hiddleston in a new, two-minute Web film. The film, which is on www.BritishVillains.com and on Jaguar’s YouTube page, featured Shakespeare’s John of Gaunt, supporting the F-Type Coupe. Hiddleston, driving the car through London, quotes “Richard II”: “This blessed plot, this earth, this realm, this England.”

Getting a surprising wave of criticism was Kimberly-Clark's campaign for Poise Microliner, where SAM, an acronym for "super absorbent material," became a salacious character. The TV and digital effort, via Ogilvy & Mather, was a bit too sexually explicit for a lot of people, as SAM is, needless to say, in the pants of women who use the product. 'Nuff said.

News about the demise of television has been exaggerated, and that seemed to surprise a lot of people, or at least interest them. According to Nielsen’s Cross Platform Report based on third-quarter 2013 data, viewers spent about 55.5 hours watching traditional TV versus nearly 15 hours on time-shifted TV. Ad spend was $78 billion in 2013.

And also alive and well are coupons. Well, coupon use is down, but still strong. And the growth area is non-food, according to my story on NCH Marketing's 2013 Year-End Topline Coupon Facts. Findings included that the number of coupons issued to consumers for CPG products increased by 3.3% in 2013 to 315 billion coupons distributed.

Maybe it was the animation and color palette, or the big news about Honda's agency shakeup, but a major draw was Honda's campaign focusing on its small cars and new media strategies. The effort included Civic Coupe and Si Coupe for the 2014 model year, with a digital footprint with unique programs on Spotify, among other things. It was also the first work by new media agency MediaVest, with RPA still as AOR.

Finally — and this should have gotten more reads, I think — was coverage of Mini's biggest U.S. campaign to date. It was also the last campaign for Tom Salkowsky, who was shifted from Mini marketing chief Stateside to a position at the automaker's headquarters in Germany. The campaign, for the 2014 Mini Cooper Hardtop, and via Sausalito, Calif.-based Butler, Shine, Stern and Partners, included hundreds of billboards national radio,. and digital on places like Flipboard, Tremor, and Crackle.