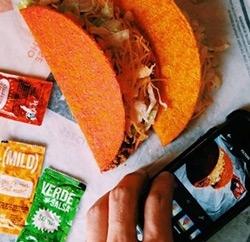 In its latest promotion designed to drive adoption of its new mobile ordering app, Taco Bell is giving away a Doritos Locos Taco with any purchase made via the app during the month of January.

The chain will give away up to 1 million of the tacos during the month through this promotion. The offer is being highlighted on social media and as part of a new TV spot that promotes the benefits of the app, which is compatible with both iOS and Android.

Taco Bell also has been making other mobile-exclusive offers through its umbrella #Onlyintheapp campaign, including $1 Freezes and early access to new items like Crunchwrap Sliders.

The promotions seem to be working: The app has been downloaded on iTunes and Google Play more than 1.4 million times since it debuted in late October, reports The Inquisitr.