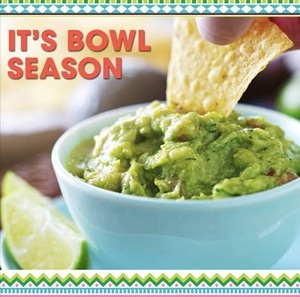 Recent years' Super Bowls have featured a growing number of ads for healthier food and snack options, including yogurt and pistachios — and 2015's will include the first spot from the world of fresh produce: Avocados From Mexico (AFM).

It's fairly rare for fresh produce brands to invest in brand campaigns, never mind spring for a Super Bowl ad (a 30-second Bowl ad is reportedly going for about $4.5 million this year).

But avocados are on a roll: The total volume of the fruit sold in the U.S. jumped by nearly 112% between 2005 and 2014, to reach 1.7 billion pounds, and annual sales here have reached about $2 billion, according to AFM. Further, Mexican growers are in a particularly favorable position, because of their avocados' multiple growth seasons, which makes them the only ones available year round in the U.S.

In short, the Mexican avocado industry, through AFM, its Irving, Texas-based marketing arm, can afford to invest in further accelerating growth in the U.S. through the Super Bowl's massive audience reach.

Guacamole is avocados' No. 1 use, and guacamole consumption peaks during the Super Bowl, making it the "perfect" event to showcase the fruit's snacking versatility and nutritional value, said AFM president Alvaro Luque.

The 30-second Bowl ad (which won't be revealed until the game) will be supported by brand appearances during pre-game programming, "The Today Show" and on NBCSN.

In addition, to drive sales during the playoffs leading up to the Bowl appearance, during January, AFM will run a public relations campaign dubbed "No Guac, No Game." Through media interviews, social media chats and AFM's online properties, actor and "Extra" host Mario Lopez and his wife, Courtney, will share recipe ideas and convey the message that great guacamole may be "the only thing that brings a divided house of passionate sports fans together," says AFM.

AFM will also be running an ambitious social media engagement program around its Bowl investment. Its site boasts that the brand uses the most advanced digital technology in the market to gather consumer data and connect with consumer groups in "innovative ways."

Nor is AFM limiting its marketing efforts to pushing guacamole. Reflecting that avocados are also an increasingly popular ingredient in sandwiches, and to keep momentum going post-Bowl, the brand will run an in-store "Fanwich" contest between Jan. 15 and April.

Jeff Mauro, “The Sandwich King” and co-host of “The Kitchen,” will help drive online entries for the contest, which challenges consumers to create the ultimate sandwich or wrap made with fresh avocados for weekly chances to win $500 grocery gift cards and entries for a grand prize drawing.

Also, AFM will offer a retail display contest (called "It's a Wrap"), display materials, IRC coupons and more than $100,000 in display prizes.*

The Super Bowl spot and the other winter initiatives are all part of AFM's broader 2014-2015 campaign, which began last October and will run through May. In total, the pioneering produce campaign is designed to yield 1.6 billion media impressions.

* Editor's note: This sentence was changed to reflect a development that occurred post-publication.