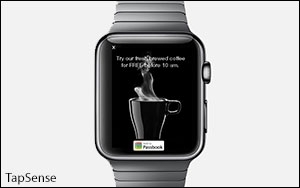 Apple had been relatively quiet in the programmatic space until late 2014, but it finds itself tied to ad tech news to kick off 2015.

The Apple Watch, which isn’t expected to launch for a couple of months, already has programmatic support. Mobile ad exchange TapSense this week announced a programmatic ad platform that will support delivering ads to apps on the Apple Watch.

“Wearables and 'Internet of Things' are the next frontiers in the mobile revolution. We are excited to announce industry’s first programmatic ad platform for Apple Watch developers and brands, ” stated Ash Kumar, co-founder and CEO of TapSense.

Claims of “industry first” are tossed around so often it’s easy to go numb to the phrase, but this may truly be a first. After all, the platform beat the product it will be serving ads on, and Apple hasn’t even made its WatchKit guidelines available yet. Kumar says TapSense will review its SDK -- which is currently in beta, along with the Apple WatchKit SDK -- once Apple announces its guidelines.

In a company blog post announcing the new platform, Kumar writes that it will support interactive ad formats supported by the Apple WatchKit such as “glances and full-screen experiences while getting rid of banner ads.” Kumar initially wrote that TapSense would support ads for watch faces, but the post was later updated to note that Apple’s WatchKit SDK does not provide developer access to watch faces.

The platform also supports hyper-local targeting, so marketers can offer coupons that can be redeemed via Apple Pay, for example. Kumar notes that this could allow marketers to “link their marketing spend accurately with offline purchases.”

However, as of now, the ability to redeem TapSense-delivered coupons via Apple Pay may require some workarounds. Kumar writes that TapSense's SDK will not be directly integrated with Apple Pay, noting that consumers will have to add ad offers to Passbook. Alternatively, the ad could have a readable barcode.

The ability to accurately tie marketing spend to offline sales is something the industry eager to achieve. Oracle last month spent an estimated “high hundreds of millions” to acquire Datalogix, an audience-targeting firm that does just that.