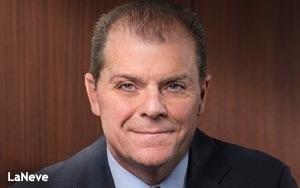 Mark LaNeve is the dealer guy par excellence. Now he's back in that sweet spot at Ford. The marketer, who recharged Cadillac, helped change the conversation about insurance at Allstate with a humorous spin on mayhem, and most recently ran Global Team Detroit for Ford, is replacing John Felice. Felice is retiring as Ford Motor's VP, U.S. marketing, sales and service after 30 years.

LaNeve, a former All American linebacker at University of Virginia, has played pretty much every position on the unforgiving gridiron of auto operations. He was a marketer at Pontiac before taking the helm as president of Volvo in the U.S., where he oversaw the successful "Volvo for Life" campaign. And back at GM, he ushered in Cadillac's product and brand reinvention, evinced by the CTS sedan and the umbrella "Art and Science" marketing campaign, “Break Through” early in the millennium, with Led Zeppelin music, CTS’ careening across the desert, and actor Gary Sinise telling us to rethink the brand.

And at Team Detroit, LaNeve has overseen Ford's dedicated agency business in London, Sao Paulo and Shanghai. The new Lincoln agency, New York-based Hudson Rouge, is -- or has been -- under his purview as well.

Jim Sanfilippo, who himself has had nearly as many roles both on the auto operations and agency side, says the choice is genius, and is giving Ford's CEO Mark Fields a "murderers row" of talent. "LaNeve is a marketing-oriented sales guy, a hands-on guy, and that's his nature," he says. "Dealers love that.” He adds that the automaker’s perennial crosstown rival, GM, lacks someone with “that emotional connection, that ability to say 'let's go up this hill.' That itself is worth a point in market share. And he's a risk taker, not a 'status quo' guy."

Sanfilippo also points out that LaNeve's position at Team Detroit will work well for Ford because he knows the inner workings of Ford's dedicated global marketing partner. And there's his comprehensive experience at that very rival in the RenCen. "He had those experiences at GM for eight brands. And he was president of Volvo when it had its best year in the U.S. ever."

For Lincoln, he has been instrumental in forwarding Matthew McConaughey as spokesperson for the brand, resulting in a multi-year deal and love-it-or-hate-it (and much parodied) ads for the MKZ and MKX, a program that got the brand a much-needed awareness boost, thanks in part to lots of earned media. As Sanfilippo puts it, the bottom line for LaNeve was making Lincoln a part of the conversation.

Joe Wiesenfelder, executive editor at Cars.com, says now is an especially critical time for Ford — and probably every auto brand — to have a dealer guy at the company. "LaNeve is overseeing service, and if you look at what Ford is taking on right now with the new aluminum F-150, and advances in telematics, the nature of service is changing fast.”

Former chairman of the GM dealers council member Paul Rubin, who is principal of White Bear Lake Superstore (GMC and Buick) in White Bear Lake, Minn., tells Marketing Daily that he's known LaNeve since “way back when he was [Pontiac] Bonneville brand manager, during the days of [former CEO] Ron Zarella.” He says he was dealer council chair when LaNeve was heading the dealer council from the GM side. “He's savvy and retail oriented. He answers the phone when dealers call. He's unpretentious, hard working, loyal, and a person that understands our side of the business. And he was there for me when I really needed it, which is an amazing thing in a giant company.” He adds that LaNeve gets how to “scheme” the business. “He understands the balance of which incentives to put on a car and what attributes to advertise."

Dan Marks, Lincoln Dealer Council chair and owner of Libertyville Lincoln in Libertyville, Ill., says he and other dealers are excited about the move. "I have known Mark for the last year and a half at Team Detroit. He did a great job with the team. He's dynamic, gets the dealers, and they just like him a lot. He's a straight shooter, and I like his approach. We're excited."

It's also hard to be comprehensive about LaNeve without saying at least something about a challenge in his personal life, and which has made him something of an activist and advocate: he and his wife have raised two autistic boys, and he has therefore had to immerse his life in it, a second full-time job. He is involved with Autism Speaks and Cure Autism Now, and has spoken widely about the issue.

Sanfilippo concludes this way: "There are two kinds of leaders in the car business: the guy with a gun at your back, and the guy you follow and die for. He's the second guy."