Controversy Erupts Over TLC Special 'My Husband's Not Gay' 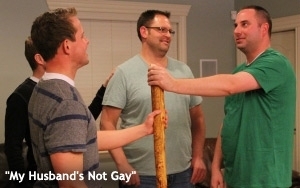 A protest launched by gay activists against a one-off special airing this weekend on TLC seems way out of proportion to what the show really is.

This one-hour, docu-reality show is called “My Husband’s Not Gay” (scheduled for this Sunday night at 10 Eastern). It profiles three married couples in Salt Lake City (male-female couples), plus one of their single male friends, who are living a lifestyle in which the men openly acknowledge their attraction to other men, but never act on these impulses (or so they claim).

At the same time, the men are in happy marriages with their female wives (or so the husbands and wives all claim on the show). And the single male friend, who is similarly attracted to men, is looking for a woman to marry too.

They have adopted this approach to their feelings basically because they are Mormons. So in keeping with their faith and their upbringing, they seek to have traditional families by pursuing heterosexual marriages, despite their attraction to men.

And it’s no secret either that the Mormons -- known formally as the Church of Jesus Christ of Latter-Day Saints (LDS) -- frown on homosexuality. As a result, these men -- and, by extension, their wives -- “struggle” in various ways with these “gay” feelings.

They’ve even come up with a phrase to describe the men’s situations: Instead of saying the men are gay, this group prefers to say that the men are “same-sex attracted” or possess a point of view they label as “SSA” or “same-sex attraction.” It’s true that in the show, the acronym “SSA” is bandied about in terms that make you think the people in the show view it as an affliction. For example, a wife will say of her husband “He has SSA” -- as if it’s a disorder like ADD, for example.

But at no point in the show does anyone propose that the men should seek some sort of “correction” to their thought processes through any kind of counseling -- or more to the point, so-called “reparative therapy” that is supposed to “cure” men of their homosexual thoughts and attractions.

And yet a protest against the show, in the form of an online petition launched by a Virginia Beach man and endorsed by the Gay & Lesbian Alliance Against Defamation (GLAAD), is based on this Virginia man’s personal experience with reparative therapy – something that is not even mentioned on the show.

How do I know this? Because I actually watched it, thanks to TLC, which has made the show available to TV columnists in advance of its air date this weekend.

I have no idea if this Virginia man or anyone at GLAAD has seen the show. I’m tempted to say they probably haven’t, because the show is so mild-mannered that it is difficult to understand why anyone would get so angry as to demand that TLC yank the show between now and Sunday night. As it is, GLAAD is gloating on its Web site that this online petition aimed at censoring the show has collected more than 70,000 on-line signatures.

“This show is downright irresponsible,” GLAAD President Sarah Kate Ellis is quoted as saying in a story on GLAAD’s Web site that reports breathlessly on this “controversy. “No one can change who they love, and, more importantly, no one should have to. By investing in this dangerous programming, TLC is putting countless young LGBT people in harm’s way.”

"Dangerous programming"? Hardly. In reality, this show is so congenial that it borders on dull. Moreover, the participants in the show make their own personal points-of-view crystal clear -- and none of their opinions include harming or disparaging gay people in any way.

One scene even has the men discussing their lifestyles with two openly gay men they encounter in a clothing store. There is no debate or fight of any kind -- just a conversation in which both sides are heard.

“I can certainly understand why some gay people would feel the term SSA or same-sex attraction is offensive,” says one of the husbands in the show. “They say, ‘I was born this way and I don’t have any choice in the matter and this is just what I need to be.’ I was certainly born with some homosexual attractions, but what we say is there’s still a choice in our behaviors.”

Another man describes his situation this way: “I’m not afraid to be called gay,” he says. “I just feel like it’s not real accurate. I don’t feel like the label totally describes me or who I am and sometimes I feel like if someone says he’s gay, it means you’re in relationships with men and I’m not.”

Gays are free to disagree with these points of view, of course. But the man above who says he doesn’t self-identify with the word “gay,” even if he tends to ogle attractive men in restaurants and gyms, should also be free to express himself.

The bottom line is: I have a feeling that the nation’s large and very vocal gay community will survive this Sunday’s airing of “My Husband’s Not Gay.”