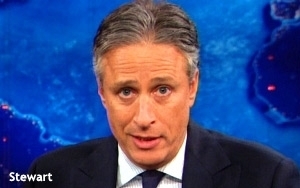 Late-night comedians turned serious Wednesday night in the wake of the day's deadly terror attack on the French satirical magazine Charlie Hebdo in Paris. Here is how the subject was addressed on “The Daily Show with Jon Stewart” on Comedy Central, “Conan” on TBS and “Jimmy Kimmel Live” on ABC.

Stewart opened his showwith this statement:

“You know, I think we'd all agree 2014 was not a great year for people. But I think the hope was that 2015 would bring sort of a respite from the kinds of terrible events that have become all too familiar for us, but …

“But those guys at Hebdo had it and they were killed for their cartoons. Stark reminder that, for the most part, the legislators and journalists and institutions that we jab and ridicule are not in any way the enemy. For however frustrating or outraged the back-and-forth can become, it's still back and forth a conversation amongst those on … let's call it Team Civilization. And this kind of violence only clarifies that reality.

“But of course our goal tonight is not to make sense of this because there is no sense to be made of this. Our goal, as it is always, is to keep going. Keep calm and carry on – or whatever version of that saying is [hanging] in your dorm room.

“We spent the majority of our day honestly in shock and grief, but also searching for a segue back into a program such as this and, you may not believe it, but we believe that we have found it. It’s a story that combines the difficulty of ridding society of these types of persistent toxic ideologies … with a creature that has four stomachs. We move forward tonight with a segment we call ‘Nazi Cows’.”

Here's what Conan O'Brien said on his show:

“As many of you know, there was a terrible tragedy in France today. Twelve people were killed because a satirical newspaper made jokes that some group found offensive.

“Obviously, all of us here are accustomed to bad news from around the world, but this story really hits home for anyone who, day in and day out, mocks political, social and religious figures. In this country, we just take it for granted that it’s our right to poke fun at the untouchable or the sacred.

“But today’s tragedy in Paris reminds us very viscerally that it’s a right some people are inexplicably forced to die for. So it is very important tonight that I express that everybody who works at our comedy show [is] terribly sad for the families of those victims, for the people of France and for anyone in the world tonight who now has to think twice before making a joke. It’s not the way it’s supposed to be.”

On “Jimmy Kimmel Live” on ABC, the subject came up in a conversation with guest Bill Maher, according to this account on HuffingtonPost.com:

“Hundreds of millions of Muslims?” Kimmel asked him.

“Absolutely,” Maher insisted. “That is mainstream in the Muslim world. When you make fun of the Prophet, all bets are off. You get what’s coming to you.”