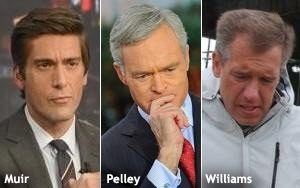 Weather was the most-reported topic on the network newscasts in 2014, while the year’s crucial (or so we thought) midterm elections didn’t even make the list of the Top 20 stories covered by the networks last year.

These are two of the findings from the Tyndall Report’s annual analysis of “The NBC Nightly News with Brian Williams,” “ABC World News Tonight” (which switched anchors from Diane Sawyer to David Muir last September) and “The CBS Evening News with Scott Pelley.” The report on 2014 was released on Thursday.

These annual reports, from analyst Andrew Tyndall, are based on the number of total minutes spent on various topics throughout the year on the three evening newscasts. One could argue that tallying up the minutes spent on stories -- a quantitative approach -- is not the best way to assess the quality of the coverage of these topics and stories, since some of the stories may have been well told, whether long or short.

On the other hand, the quantitative approach might have something to say about the emphasis the newscasts placed on various stories. (TV research experts, feel free to weigh in here.)

“Winter weather” was the category that got the most minutes of airtime in 2014 – a total of 515 minutes across all three newscasts, according to Tyndall.

Tyndall’s annual report also lists the correspondents who were seen the most (Tom Costello, NBC’s lead aviation correspondent, was No. 1 with 333 minutes of airtime last year), and assesses the “reporters’ use of bureaus.”

The latter category is a means of measuring the networks’ emphasis on either foreign or domestic stories. Tyndall’s calculations found that the three newscasts aired a total of 1,976 minutes of stories with foreign datelines, compared to 7,725 minutes of stories from domestic locations.

The disparity between foreign and domestic reporting was especially felt in the networks’ coverage of the ebola scare. “Ebola in West Africa should have been an international story,” Tyndall writes in the report. “But only 9% [of ebola stories] had a foreign dateline, so it became a domestic scare instead.”

Having said that, Tyndall nevertheless singled out CBS for having “its busiest year of international coverage since 1990” – 886 minutes (out of the three-network total of 1,976 minutes).

Based on the minutes spent on various subjects, Tyndall is critical of ABC News and new anchor David Muir, accusing “World News” of emphasizing stories about “sports and showbiz.”

“ABC, under new anchor David Muir, continued to downplay the year’s top stories – not only international and political news, but also protests against the police use of deadly force and the young refugees seeking asylum at the Mexican border,” Tyndall writes. “Instead, ABC set new records on sports and showbiz. Led by Ginger Zee, ABC had its second-busiest weather year (it was a cold winter), even though no major disaster occurred.”

Tyndall was also critical of NBC News for “shilling” for NBC Sports and, in particular, last winter’s Olympics in Sochi, Russia. “At NBC, as it always does, News shilled for Sports, over-hyping the Olympics in Sochi,” Tyndall wrote. According to his report, “The NBC Nightly News” expended 121 total minutes on stories about the Sochi games, compared to 39 minutes on CBS and 60 minutes on ABC.

On the year’s political coverage, Tyndall was especially critical, particularly because 2014 was a midterm election year. “Politics was practically purged from the nightly news agenda in 2014,” he writes. “Never have midterm elections been treated with such disdain. And never have federal domestic policy debates made such little news. Not a single White House or Capitol Hill correspondent qualified for the Top 20 ranking of reporters.”

By contrast, transportation stories had their “heaviest year on record,” Tyndall said, due mainly to the two Malaysian Airlines disasters – the lost jetliner over the Indian Ocean and the airliner shot down over Ukraine.

And who was the “most newsworthy man of the year,” based on minutes of evening-news airtime? That would be Vladimir Putin, the central figure in all of the stories about the Ukraine crisis and the Sochi Olympics. The “most newsworthy woman” was Mary Barra, CEO of General Motors.