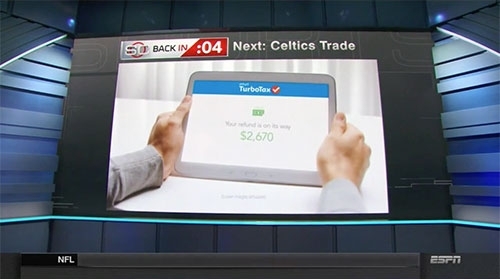 Update: An ESPN spokesperson said that the Saturday 1 a.m. edition of "SportsCenter" was ESPN's highest-rated daily edition among men 18-34 in 2014.

ESPN ran its first programmatically sold ad during the Saturday 1 a.m. edition of “SportsCenter,” per The Wall Street Journal, and the fact that it was purchased (by Turbo Tax) via an online auction was not the only unconventional aspect of the ad.

The ad, which can be found on the WSJ article, was not shown during a standard commercial break. It took its own 30-second block -- almost like a Hulu ad block -- and was shown from within the “SportsCenter” set. Also unlike traditional TV ads, the Turbo Tax ad was never given the full screen.

Along the bottom of the screen, the ESPN news ticker can be seen running throughout the spot, and a 30 second countdown clock is displayed directly above the ad. These decisions allowed ESPN to keep its “SportsCenter” themed wall in the background and display the ESPN and “SportsCenter” logos on screen -- as well as the ticker -- while the ad played.

Thanks to some photoshopping, we can tell you that the ad took up about 31% of the TV screen’s pixels. That -- coupled with the fact the ad was shown at 1 a.m. -- clearly exhibits that ESPN was simply testing the waters; the network was treating its programmatic ad much differently than it would a "standard" ad, not to mention a "premium" ad.

A non-full-screen TV ad played from within the studio at 1 a.m. during a non-conventional commercial break is a premium TV broadcaster’s equivalent to “remnant” display inventory, I suppose.

Yet all of the oddities about the ad may have drawn more consumer attention. It was still centered in the screen (although ESPN’s camera was moving as it if were first-person movie, which could be a bit distracting), and the fact that viewers knew it was only a 30-second ad break likely made them less inclined to get up and leave.

How does ESPN’s decision to give its first programmatically sold ad roughly one-third of the screen stack up to digital video advertising? I pulled up YouTube, played a video in the standard player, and measured how much of my entire screen and how much of my browser was taken by the video ad.

Interestingly, ESPN’s 31% bested both. The YouTube ad took up about 18% of my entire screen, and 23% of my entire browser. Obviously this can change depending on how big or small the consumer’s browser is, and the consumer does have the option of going full-screen when on their computer.

Even still, it’s interesting to note that ESPN’s pilot programmatic TV test was given more relative screen space than YouTube -- one of the premiere outlets in digital. The 31% mark may not be the end-goal of programmatic TV champions, but it’s not as bad as it sounds.