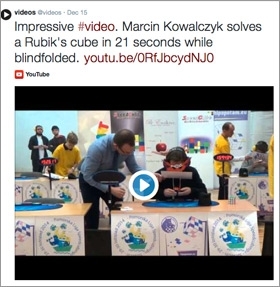 All told, domestic digital video advertising will reach $7.7 billion this year, which would represent a 30.4% increase over 2014. That’s according to new estimates from eMarketer.

The big question is whether social giants like Facebook and Twitter are destined to overtake Google’s YouTube unit, which has dominated the video sector for nearly a decade. The answer? It’s too early to tell, according to Debra Aho Williamson, principal analyst at eMarketer.

"While Facebook has grown quickly as a video platform, there are many reasons to think YouTube will continue to be a favored video advertising destination for marketers,” Williamson explains in a new report.

One possibility, according to Williamson, is that “Facebook's entry could help grow the overall video market, rather than take away from YouTube.” This year, YouTube will take 20% of all domestic digital video ad dollars -- or more that $1.5 billion -- eMarketer estimates.

It is still too early to determine social networks’ share of video ad dollars, according to eMarketer. What is certain, however, is their increasing impact on viewability and measurement standards,

“Because … social platforms have differing standards for what constitutes a video view, it is creating headaches for marketers,” according to eMarketer. To maintain the upper hand, “agencies are pitting the platforms against each other.”

Without addressing reports of a forthcoming YouTube-like video hub, Facebook recently opened up about the transformative effect video is having on its platform. The amount of video shared by users and brands has increased more than 300%, over the past year, while the number of video posts per U.S. consumer has increased nearly 100%, according to Facebook’s internal figures.

Since last summer, Facebook has averaged more than 1 billion video views per day, while more than 50% of U.S. users who come back to the network daily watch at least one video per day, on average. Positioning itself more as a video hub on par with YouTube, Facebook recently rolled out a new design for the Video section of Facebook Pages.

Page owners — from brands to news outlets — are slowly being invited to top off their pages with featured videos. The super-sized videos will be accompanied by a live comment feed, and a playlist of additional videos.

Across channels, video — and related monetization opportunities — are booming. Indeed, online video's share of global ad spend will increase from 1.9% in 2014 to 2.8% in 2017, according to ZenithOptimedia's new Advertising Expenditure forecast.