Younger Generation Reacts To Amazon Woody Allen Hire: Who's He? 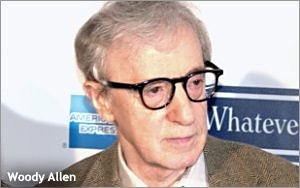 Woody Allen is a curious choice for Amazon Prime.

He’s a renowned movie director, of course -- a marquee name who has given Amazon a couple of days of headlines this week on the showbiz Web sites. Amazon made the announcement on Tuesday: Allen is creating a series -- his first ever -- for Amazon Studios.

It has no title, no cast, no premiere date. Nor were the number of episodes announced, although the announcement from Amazon said the show has been given a “full-season order,” which these days could mean almost anything. The episodes will each be a half-hour, Amazon said. Allen will write and direct them.

With the half-hour length of the episodes, and Allen’s history in comedy, you might guess this “Untitled Woody Allen Project” will be a comedy. You might even be correct. However, this wasn’t specified either in Amazon’s announcement.

The press release did contain a meaningless, sarcastic “prepared” quote from Allen, who supposedly said: “I don’t know how I got into this. I have no ideas and I’m not sure where to begin. My guess is that [Amazon Studios Vice President] Roy Price will regret this.”

The quotation is b.s., of course. It’s just Allen playing the role of the insecure “nebbish Woody Allen” -- the role he’s played publicly for decades. I am sure he had at least some idea of what he was getting into when he committed to creating a TV series.

The trade press wasted no time declaring that this Woody Allen hire was a “huge victory” for Amazon in its quest to produce and present TV shows. “The Allen series is a huge victory for Amazon streaming hot on the heels of its Golden Globes momentum,” gushed TheWrap.com. “The streaming network's hit transgender show, ‘Transparent,’ starring Jeffrey Tambor, won Best Television Series – Musical or Comedy at Sunday’s awards.” Whenever I read stories like this, I ask myself: Whatever happened to skepticism in journalism?

At least Time magazine's TV columnist made mention of the risks presented by going into business with Allen, whose public image has been tarnished ever since his 1997 marriage to Soon-Yi Previn, one of the adopted children of his former long-time girlfriend, Mia Farrow. Even worse, Allen has been dogged repeatedly by the accusations that arise occasionally that he is a child molester (allegations that have never been proven and which he and his spokespeople have repeatedly denied). The Time column even linked Allen to Bill Cosby, pointing out that Cosby had a new show in development at NBC until NBC pulled the plug on it following all the rape accusations leveled against Cosby last year.

Understandably, Amazon's press release made no mention of Allen's public-image baggage. Instead, Amazon dutifully portrayed Allen as “a visionary creator who has made some of the greatest films of all-time [blah blah blah] … We couldn't be more excited [etc., yawn],” said a prepared statement attributed to the aforementioned Roy Price.

Okay, fine. My biggest question about recruiting Woody Allen to produce a streaming-video series isn't the one about his public image, since all the accusations and gossip surrounding his personal life have never put a stop to his regular production of a movie a year -– some of which are critically acclaimed (such as “Blue Jasmine”) and some not.

The bigger question would be the one about his appeal to people who watch TV shows via streaming. Very generally speaking, the streaming-video audience is decidedly younger. And the highest-profile streaming-video series are usually described with adjectives such as “hip” and “edgy.”

These are not words I would use to describe either Woody Allen or his fan base, as anyone well knows who has ever attended a Woody Allen movie in Manhattan on opening weekend. His fans are an over-65 group (who will show you no mercy if you happen to be standing between them and two seats together, by the way).

They are not a group who are exactly known for their embrace of “new” media such as video-streaming. It’s certainly possible that Allen, at age 79, sees this Amazon deal as an opportunity to build a following among younger audiences who aren’t flocking to his movies but who might know and respect his work just enough to be excited about what he might come up with for Amazon.

It’s entirely possible that he will succeed too, since the real Woody Allen is a lot shrewder than he ever lets on.