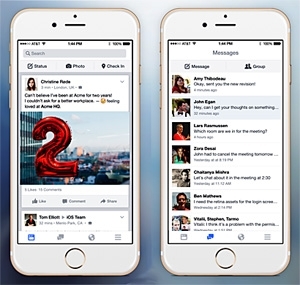 Facebook officially moved into the workplace on Wednesday with the launch of a Facebook at Work mobile app, and desktop extension. Still in beta, the app and Web extension are primarily designed to help business colleagues more easily connect.

“Facebook is beginning to test Facebook at Work with a few partners,” a company spokeswoman told Social Media & Marketing Daily, on Wednesday. “The app will be visible in iOS and Android App Stores and accessible to pilot partners only.”

“Facebook at Work was created completely for use within a company,” she added. “That means employees’ Facebook at Work info is safe, secure, confidential and completely separate from their personal Facebook profile … The info shared among employees is only accessible to people in the company.”

Facebook at Work will offer many of the same features as its flagship network, including News Feeds, Groups, messages, and events. Going forward, it is widely expected to add additional enterprise features, like those that let users collaborate on documents.

The initiative comes as Facebook’s domestic rate of growth appears to be leveling off, according to the latest survey of social media use by the Pew Research Center.

Facebook is looking for new growth opportunities, and the business world could be the next frontier.

With or without Facebook at Work, analysts this week said the social net is well positioned for the next year. “Facebook remains our favorite name in the [Internet advertising and digital marketing services] sector,” Brian Wieser, a senior analyst at Pivotal Research Group, explained in a note to investors, on Wednesday.

“Facebook can point to a wide range of factors which will sustain growth through 2015 and beyond, as increasing share of spending from small businesses and large brands alike as well as ongoing improvement in focus on performance-based marketers will all help to sustain rapid growth,” Wieser noted.

Since reports of the service first emerged, last year, Web watchers and rivals have had plenty of the time to prepare for Facebook’s expansion into the office.

LinkedIn, for example, appears to have accelerated its rate of product innovation in recent months. Along with a new home page and activity dashboard, the business world’s de facto social network is reportedly working on an app and some complimentary tools to help connect employers and their existing employees.