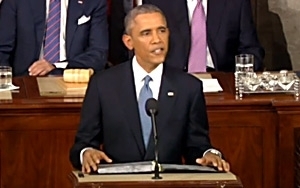 While the Entertainment Software Association applauded the inclusion of cybersecurity and illegal hacking, the Interactive Advertising Bureau focused on what will influence changes in the digital marketing landscape. Looking for the overall sentiment of the American population, SurveyMonkey and MSNBC teamed up to poll more than 1,400 Americans' responses to Tuesday night's State of the Union address.

The Internet allowed millions to watch the address live, while online polls and social sites pulsed the reaction from Americans. Aside from cybersecurity, the president spent time talking about closing tax loopholes for the rich, providing free community college, helping families afford child care and requiring that workers earn paid sick leave. It's clear from the results of the polls that few realize who will pay for these changes.

The poll reveals that 64% of viewers agreed that Obama's tax increases on the wealthy are a good idea, since the wealthy can afford to help pay more for programs and government operations. In contrast, 32% believed tax increases are a bad idea because they will take money from the wealthy that could otherwise be invested to help grow the economy.

About 32% of viewers said jobs and economic growth were the most important issues for President Obama and Congress to address this year, followed by terrorism at 16%, education at 12%, and immigration at 11%.

While 73% of viewers reported being enthusiastic or satisfied with the State of the Union address, 19% were dissatisfied and 6% were angry. In general, Obama is focused on the correct issues, 68% of viewers agreed, while 32% said the same about Republicans in Congress.

When reviewing the study's outcome, consider that members of the president's party are more likely to tune into the annual address. In this case, 38% of viewers identified themselves as Democrats, 16% as Republicans and 31% as Independents.

While the President Obama addressed America, it was clear from the MSNBC and SurveyMonkey results that the message of free hit home mostly with high school graduates with or without some college degree. Some 52% voting in the survey have a high school diploma or GED equivalent, and/or some college, but no degree. About 66% are Caucasian, 15% Hispanic, and 12% Black. While 19% are between the ages of 45 and 54, 41% are between the ages of 18 and 44.

The online survey, conducted Tuesday, Jan. 20, uses SurveyMonkey and considered age, race, sex, education, and region to match U.S. Census data. A total of 1,429 U.S. adults completed the survey, including 651 who watched or listened to the address.