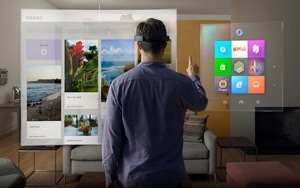 Talk about weird timing. A day after Google seems to be retreating from the Glass revolution it tried to spark a couple of years ago, Microsoft dives into the augmentation game goofy-headset-first.

Making the Glass eyepiece look demure by comparison, Microsoft’s newly unveiled HoloLens flies its geek flag high. Sure this headset is reminiscent of Oculus Rift and other VR paraphernalia. But unlike most of these other gadgets, which tend to be for sit-down ,fully immersive experiences, this is a wearable AR device that superimposes holographic images over specific points in your view.

Microsoft envisions this in a wealth of work, play and leisure scenarios. It can overlay 3D models onto objects to see how designs might augment them. It can project movable objects onto a room to better visualize redesigns. Gamers can have animated characters running around their actual living space. And of course it can project Neflix on any space.

Interaction is by voice and gesture. The interface is not just projecting images into view but apparently registering your hand movements for pinching, zooming, pointing, etc.

The goofy part is that Microsoft sees people walking around the house with this thing. In one publicity shot, a person is in the kitchen projecting a soccer game on the wall, a to-do list on the refrigerator, a recipes icon near the oven, and a weather report from Maui on the table. Is this really how any of us wants to hang around the house?

I have no problem with augmentation -- in its place. Any one of these operations is workable. But the problem with eccentric mobile geek fantasies like these is that they misunderstand something fundamental about how technology always evolves. We create boundaries for the media even as we allow it into more intimate recesses of existence. Google Glass and the HoloLens overplay their hands by desperately following the geek fantasy of totalizing the tech-mediated experience. They so desperately want to invent a new interface on life, they completely miss just how silly and even offensive their futuristic depictions are.