AC/DC In D.C. As Automakers Reveal Electric And Hydrogen Plans 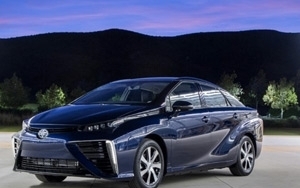 Johan de Nysschen, global head of GM's Cadillac unit, kicked off the Washington Auto Show with a speech about how the luxury brand is moving to compete globally against the perennial luxury leaders, with new products and old-fashioned bespoke interiors. The solution, he said, is a product cadence of eight all new vehicles, five of them in product categories Cadillac hasn't played in before, amounting to an investment of over $12 billion.

On March 31, Caddie will introduce the CT6 flagship, a result of a $300-million investment at the company's facility in Hamtramck, Mich. “The CT6 is a large, spacious car as fuel-efficient and agile mid size car,” he said, explaining how the automaker is achieving this through a new lightweight-materials body, and such fuel-saving technology as start-stop and cylinder deactivation.

Toyota used the show to talk about the lightest element, with its focus on the Murai, a car whose logo isn't the Toyota intersecting half circles, but an elaboration on an atom of hydrogen with its one electron and one proton. Multiply that element's atomic number by 200 and that's how many of the cars Honda's bringing to the U.S.

Not a lot, but Nihar Patel, VP North American business strategy, said the car represents Toyota's future, and therefore the automaker's hopes for the success of the hydrogen economy. To that end, he said, Toyota is open-sourcing its technology, essentially offering up the 5,700 patented technologies royalty free. BMW has said it will do essentially the same thing. “By sharing patents and components, systems can be refined, the cost can come down, and we can broaden the customer base,” he said.

The car goes 300 miles on a tank of hydrogen, and can refuel under five minutes, per Patel. It ain’t cheap, coming in at $44,500 with government incentives, although Toyota said it will offer a $499 per month lease plan. Assuming one gets in line early to be one of the 200.

On the infrastructure and fueling-station side of the hydrogen strategy, Toyota is partnering on the West Coast with First Element for fueling stations, and on the East Coast with Air Liquide to set up 12 stations in five states: Massachusetts, Connecticut, Rhode Island, New York and New Jersey.

Toyota is also part of hydrogen-economy industry group H2USA, which is promoting hydrogen drivetrain incentives. “Plug-in hybrids can get $7,500 in incentives, but fuel-cell electrics get zero.” Toyota is also kicking off a Mirai experiential tour across the Northeast seaboard

Volkswagen of America and BMW of North America have their owner infrastructure partnership going on toward an electric power station with ChargePoint. The effort is toward express charging corridors on busy bicoastal corridors. The first phase involves 100 fast chargers across both coasts, with plans to expand the program to urban spaces in the rest of the country.