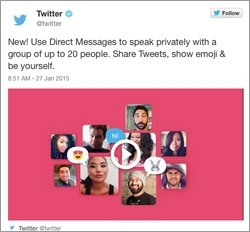 Twitter on Tuesday made good on its promise to offer group messaging and a revamped mobile video feature.

“Private conversations … are a great complement to the largely public experience on the platform,” Jinen Kamdar, product director at Twitter, explains in a new blog post.

“You might prefer to read (or watch) Tweets but converse about them privately,” Kamdar added. “You might want to continue a public conversation privately with a smaller group, or start one based on a Tweet you saw.”

With the group function, users can now start conversations with any of their followers. From there, there’s no need for everyone to follow each other in order to continue chatting. Users can expect a simple notification when they are added to a chat group.

Twitter has been trying to position itself as a direct-messaging service on par with Facebook Messenger, WhatsApp and a hosting of aggressive upstarts.

Also, the company is slowly rolling out a new mobile video feature designed to accommodate all the gifs, Vines, audio files and videos that users’ networks can produce. All users should soon be able to capture, edit and share videos directly from their Twitter app, Kamdar promises.

Twitter’s new mobile video camera and inline editing features allow users to capture and share videos up to 30 seconds in length. The launch comes as Twitter continues to lose ground to picture-based social networks, and Instagram in particular.

Facebook’s Instagram unit recently surpassed 300 million active users, while Twitter reported 284 million monthly active users at the end of the third quarter of the year. “Not only is Instagram’s audience now larger than Twitter, but its users are 1.8x more engaged, and user growth has been greater,” Citigroup analyst Mark May wrote in a recent research note.

In the bigger picture, analysts say 2015 is shaping up to be the year that social and video truly converge. If that is correct, Facebook and Twitter could challenge YouTube for a bigger share of the estimated $7.7 billion going to digital video this year.

To that end, Twitter is developing a new video ad unit to support its soon-to-launch native video tool. While details are still being hammered out, Twitter is apparently leaning toward a “pay-for-play” cost structure -- a six-second preview video that would automatically play in user feeds, and the option to click to view the entire video.