Apple Ripe To The Core: Reports $18B In Net Profit 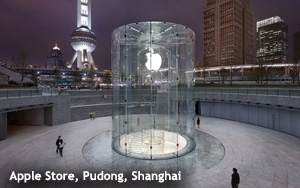 Steve Jobs would be proud.

Exceeding all expectations, Apple on Tuesday reported record net profit of $18 billion — or $3.06 per diluted share — during its fiscal first quarter. That’s nearly 40% better than the $13.1 billion in net profit that Apple reported this time last year.

Year-over-year, quarterly revenue rose from $57.6 billion to $74.6 billion, which represented a nearly 30% gain.

“Demand for Apple products [soared] to an all-time high,” Apple CEO Tim Cook said in an earning report on Tuesday.

In large part, Apple’s owes its exceptional quarterly performance to overseas growth. Indeed, international sales accounted for 65% of the quarter’s revenue. In particular, “greater China” accounted for about $16 billion in revenue during the period.

The company that Jobs built also credited its record quarter to robust iPhone and Mac sales, as well as outstanding App Store sales. During the quarter ended December 27, 2014, Apple sold more iPhones — 74.5 million to be exact — than ever before. This represented a 46% improvement over the same period, last year. Apple debuted the iPhone 6 and iPhone 6 Plus, last September, which boasted large screens.

The quarter produced earnings-per-share growth of 48% over last year and $33.7 billion in operating cash flow during the quarter — another record for the company, according to Apple CFO Luca Maestri.

As for its App Store, Apple said billings rose 50% in 2014 with developers taking more than $10 billion in revenue from apps and in-app purchases throughout the year. All told, the App Store saw total sales of around $15 billion, last year — up from about $10 billion in 2013.

For its fiscal second quarter, Apple is expecting revenue between $52 billion and $55 billion.

Analysts on Wednesday remained on the fence about whether Apple can maintain such standout growth. In a note to investors, Janney Montgomery Scott analysts Bill Choi and Robert Simmons said Apple was still positioned to deliver “standout results,” while its imminent Apple Watch launch appeared “promising.”

Also this week, Apple’s board of directors declared a cash dividend of $.47 per share of the company’s common stock.