'Parks and Rec' Data-Mining Episode Was Eerily True To Life 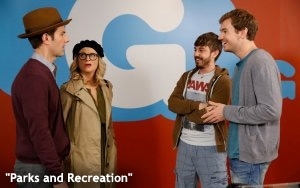 “Parks and Recreation” took on the subject of data-mining this week, and the episode was not only hilarious, it veered eerily close to reality too.

At issue was the growing presence of a huge tech company in fictional Pawnee, Ind., that was about to invest $90 million in a large parcel of real estate in the center of town.

Unhappy about the company’s looming dominance over Pawnee, bureaucrat Leslie Knope (Amy Poehler) and husband Ben (Adam Scott) hit on a plan to fight back by exposing how the company invades the privacy of Pawnee residents -- mainly by collecting data on their personal lives via their phone calls, e-mails and text messages.

To win over Leslie and other influential townspeople, the all-powerful company -- named Gryzzl -- even unleashed a fleet of drones to deliver gifts to their front doors. The choice of presents came from the very-personal data the company mined.

This episode, titled “GryzzlBox,” aired this past Tuesday night on NBC. You can watch it on NBC.com here.

“They must be data-mining!” declared Ben when Leslie’s gift box arrived at their house. “Searching our texts and e-mails and gathering profiles on all of us. This is a huge invasion of privacy!”

And so, the two conspired to investigate the company’s tactics by donning disguises and wangling a tour of Gryzzl headquarters, where they were met by a company vice president named Roscoe wearing shorts and a zippered hoodie.

They eventually learned that their disguises were unnecessary. Moreover, Roscoe had no problem blithely admitting that Gryzzl is data-mining them and everyone else.

“So. Roscoe, how does Gryzzl know all the things that someone wants? Are you guys data-mining?” Leslie asked coyly.

To which Roscoe answered without hesitation: “Hellz, yeah, dawg! Our super-rad algorithm searches all your texts, calls, banking, medical records, blah blah blah, to learn what you really want -- from snacks to new books and movies!”

He then revealed that he knew she was Leslie Knope all along. “We might know you better than you know yourself, Leslie!” he said.

“There were about 40 different ways!” he answered. “I mean, geo maps on all your different Gryzzl devices and, of course, we face-cammed you when you came in! Really glad you’re here! … I hope you can see now that there’s nothing scary about Gryzzl! I mean, we just wanna learn everything about everyone and track them wherever they go and anticipate what they’re about to do!”

During their tour, Leslie and Ben learned of a new app in development at Gryzzl that will use face-mapping to gauge a person’s moods. Roscoe invited a co-worker named Matty to explain it to them.

“As you know, the cameras on your phone are always on whether you’re using them or not!” Matty said. “This app uses facial-recognition software to track your expressions. It’s always watching!” he said happily.

“What do you do with this information?” Leslie asked.

“Well, if the camera senses that you’re in a bad mood,” answered Roscoe, “then we can geo-match you to, say, the nearest cup of sweet pick-me-up java! But if you’re in a good mood, we can geo-nudge you to, like, a sweet coffee shop! We can just keep the good times rollin’!”

Two days after the show aired, by sheer coincidence, The Wall Street Journal ran a long feature story about facial-recognition technology and how it’s being tested by marketers, retailers and law enforcement. The story was headlined: “The Technology That Unmasks Your Hidden Emotions.” The subhead was: “Using Psychology and Facial-Recognition Software to Study People as They Shop, Watch Ads; Breeding Privacy Fears.”

“A group of young companies with names like Emotient Inc., Affectiva Inc. and Eyeris are using [facial-recognition] research as the backbone of a technology that relies on algorithms to analyze people’s faces and potentially discover their deepest feelings,” the story reported.

After she was unmasked by Roscoe, Leslie issued a challenge. “These are really interesting issues, Roscoe,” she said. “I think we could debate them on TV.”

To which Roscoe reacted: TV! Retro! I love it!”