Twitter To Expand Promoted Tweets, Pressured To Up ROI 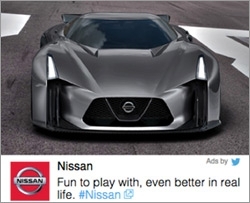 Ahead of its fourth-quarter earnings report, Twitter has announced plans to expand Promoted Tweets beyond its own borders.

Flipboard and Yahoo Japan have signed on as the first platforms to participate in Twitter’s newly syndicated ad network.

Twitter executives say the expansion is a no-brainer, considering the fact that its content is so commonly viewed on outside properties.

“In fact, in the third quarter of 2014, there were approximately 185 billion Tweet impressions off of Twitter,” Ameet Ranadive, senior director at Twitter, explains in a new blog post. Flipboard was an easy sell because it already integrates organic Tweets into its flagship app, according to Ranadive. “The Promoted Tweet will have the same look and feel that is native to the Flipboard experience,” he said.

For partner advertisers, Ranadive says the expansion opens up “a significant opportunity to extend the reach of their message to a larger audience.”

Analysts on Tuesday described the move as desperate.

“They had to do something,” said Forrester Research analyst Nate Elliott. “Just 18 months ago, Twitter was clearly the [No. 2] consumer social network, but now it appears to have tumbled into fourth place, [while] relative newcomers like Instagram and Pinterest have spent the last year collecting more and more new users.”

The problem is that Twitter has acquired only a modest number of new users in the past year, while last quarter, its per-user engagement rates actually declined, according to Elliott. “If your user base is getting passed left and right, you need to look for creative new sources of ad inventory — and Twitter hopes it’s found one.”

As for whether the effort will work, Elliott said it depends entirely on the quality of the sites that Twitter can line up as syndication partners.

The initiative comes at a sensitive time for the microblogging giant. With Wall Street demanding greater returns on its investment, CEO Dick Costolo is reportedly under increasing pressure to step down.

In the third quarter, Twitter’s revenue — up 114% year-over-year to $361 million — was in line with analysts’ expectations. Yet, user growth — and a fourth-quarter revenue forecast of $440 to $450 million — fell short of analysts’ hopes.

Among other efforts to right its ship, Twitter recently rolled out a new developer platform called “Fabric,” which provides a suite of tools to make it easier for programmers to build and distribute apps. By providing a “foundation” for developer initiatives, Costolo said Fabric — in unison with its MoPub ad-serving platform — presented “enormous” monetization opportunities.

Last year, Twitter also launched a number of new ad tools, including a Promoted Video beta, a “Buy” button for users to complete purchases directly from tweets, and objective-based campaigns, reports and pricing.

Twitter also launched an update to the profile experience on the iPhone with an increased focus on bios, tweets and photos. The change resulted in an 83% increase in profile impressions on iOS, according to internal figures.

Among other partnerships announced during the past quarter, Twitter teamed up with the NFL to better engage fans. In the #NFL Timeline, users can see NFL-related Tweets from people in their network, along with relevant Tweets from teams, players, coaches, press, fans and celebrities.