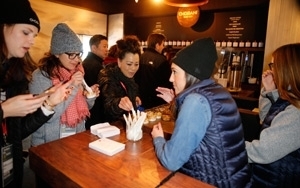 After a decade of remarkable growth, the Greek yogurt segment — and Chobani, the brand that ignited and has continued to drive much of that growth — are finally showing some signs of slowing.

Due largely to Greek's slower growth, unit sales for the overall yogurt category recently have been flat or even down slightly (under a percentage point), while dollar sales growth has been in the low single digits (up 3.4% for the 52 weeks ended Nov. 2 last year in IRI-tracked retail outlets, for example, according to industry reports).

Chobani remains the leader in the Greek market, but its once-large advantage has narrowed considerably since Dannon and Yoplait started playing catch-up in the segment. Dannon asserted that as of first-quarter 2014, its average U.S. Greek yogurt market share was 33%, and Chobani's was 35%.

According to the The New York Post, Nielsen data showed Chobani's share of the overall yogurt market exceeding 18% as of 2013, but starting to decline as of last July, to as low as 16.3%. Jetta reported that Chobani's sales dipped 1% in the 12 weeks ending Nov. 22 last year.

But Michael Gonda, corporate spokesperson for the privately held Chobani, says that the company has actually increased its share of the overall yogurt category for the past four Nielsen periods (it stands at 17.4% as of the January Nielsen report), adding that it's made strong distribution gains and is well-positioned for 2015.*

And more important, says McGuinness, Chobani believes there's still plenty of room for growth in Greek in the U.S., where consumption rates are still much lower than those in Europe and Canada, mainly because most consumption in the U.S. has been limited to the morning.

That's why Chobani's strategy calls first and foremost for continuing its barrage of new yogurt products, with the goal of serving every possible demographic segment and consumption occasion.

“People are hungry for better food options throughout the day and we’ll continue to fuel our growth with products that fill gaps in the market and meet consumer needs," McGuinness sums up. Indeed, last spring, Chobani secured a $750 million loan from private equity firm TPG Capital to finance both new products and overseas expansion.

The brand's newest offerings include "ancient grains" varieties of its Greek yogurt oats line, which was launched just last year; Chobani Kids and Chobani Tots Greek yogurt pouches, featuring Disney and Marvel characters on the packaging (the branding, and possibly the formulations, of Chobani's earlier kids' line, Champions, were off, McGuinness has acknowledged); new varieties of its also-new Flip Creations (Greek yogurt with mix-ins) line and its Indulgent (dessert) line; and new flavors of limited-batch seasonal flavors (including grape and green tea) and Chobani Simply 100 Greek (tropical citrus and raspberry lemon).

The other driving strategic emphasis at Chobani is on expanding its "grassroots" outreach, meaning sampling events. McGuinness says that sampling is critical for Chobani because experiencing its quality and taste results in conversion.

Chobani is also using these events to convey a focus on positioning itself as the "entrepreneurial, creative, authentic" player in the Greek market — by implication contrasting itself to the "big corporations" with which it competes — and to emphasize the brand's "craftsmanship." "We're really a Mediterranean lifestyle brand," McGuinness tells Marketing Daily.

Chobani's $1 billion in revenue in 2013 (per The New York Times) is certainly small by big-food standards, and a fraction of the revenues of Groupe Danone and General Mills. But Chobani continues to play in the big marketing leagues — having, for example, recently re-upped its Team USA Olympics sponsorship with a new agreement that extends through 2020, and having run both Super Bowl and Academy Awards spots in 2014.

Chobani showcased its "grassroots" approach at a rather upscale venue with its recent presence at the Sundance Film Festival, where it ran a Chobani Creation bar: a full cafe experience with offerings from yogurt-dusted popcorn to freshly made and often surprising yogurt creations made by Chobani's executive chef. There were also numerous sampling opportunities, as well as efforts like serving VIPs Chobani-inclusive breakfasts-in-bed.

McGuinness reports that the attendees (obviously key influencers in the hip, Hollywood community and beyond) said that Chobani "fit right into" the vibe of the event and Park City, Utah, and that they hoped the cafe would continue to be open beyond the festival.

Chobani is also continuing its partnership with IMG College, to expand distribution and sponsor sampling events at colleges and universities across the country — efforts that dovetail with its programs with key retail partners serving the colleges' areas.

The company reports that it will expand its fleet of sampling vehicles, dubbed "ChoMobiles," with an aim of reaching up to 40 states and sampling up to 1 million products throughout the year.

* Editor's note: This paragraph was changed post-publication in light of new information received.